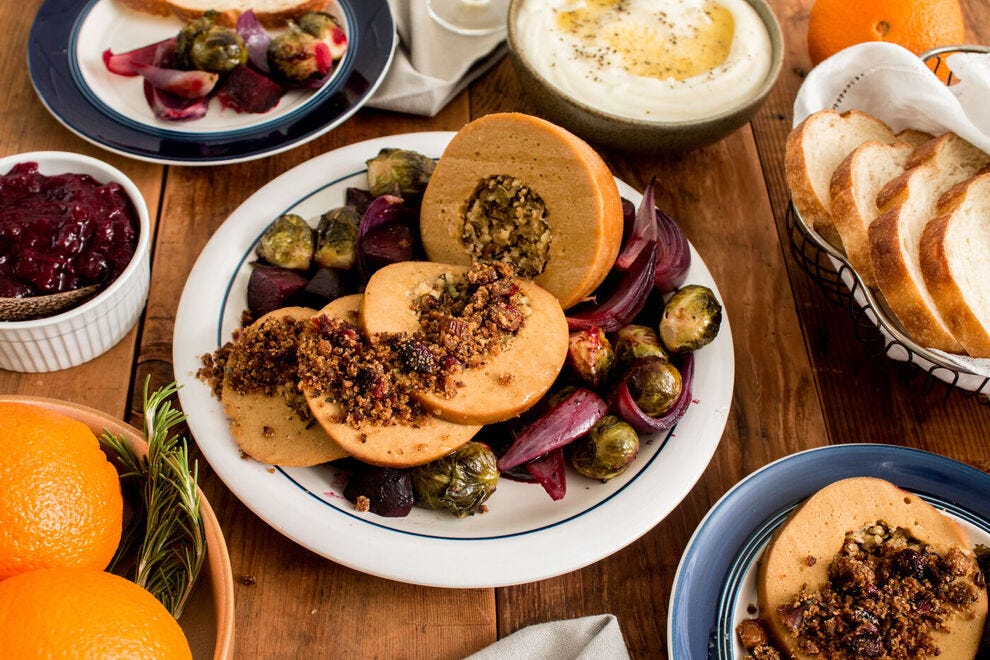 Veganism has been growing significantly since the pandemic began. According to The Washington Post, more people are aware of the positive impact that a plant-based diet can have on human health, and one in four Americans eat more protein from plant sources than they did before the pandemic. So, you may want to reflect that in your choices for the holidays this year to accommodate the changing needs of your diet.

The cool thing about delectable vegan dishes is that they can be equally enjoyed by omnivores and vegans at your gathering. That doesn’t work the other way around. So, why not serve a variety of delicious vegan treats at your holiday feasts and parties this year? 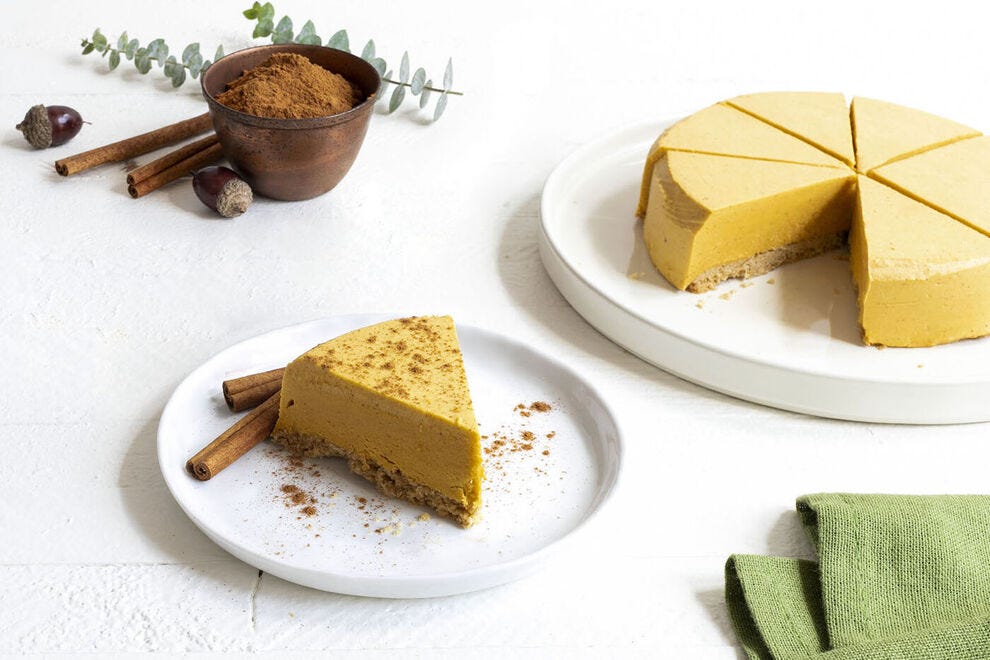 The Daiya Pumpkin Spice Cheezecake is as sweetly spicy as a classic pumpkin pie. It also has all the rich decadence that you’d expect from a traditional cheesecake. However, this modern dessert is as yummy as both put together. The pumpkin spice treat is a limited-edition flavor for the fall and holiday season, and even the most devoted cheesecake lovers won’t guess that it’s vegan unless you tell them. 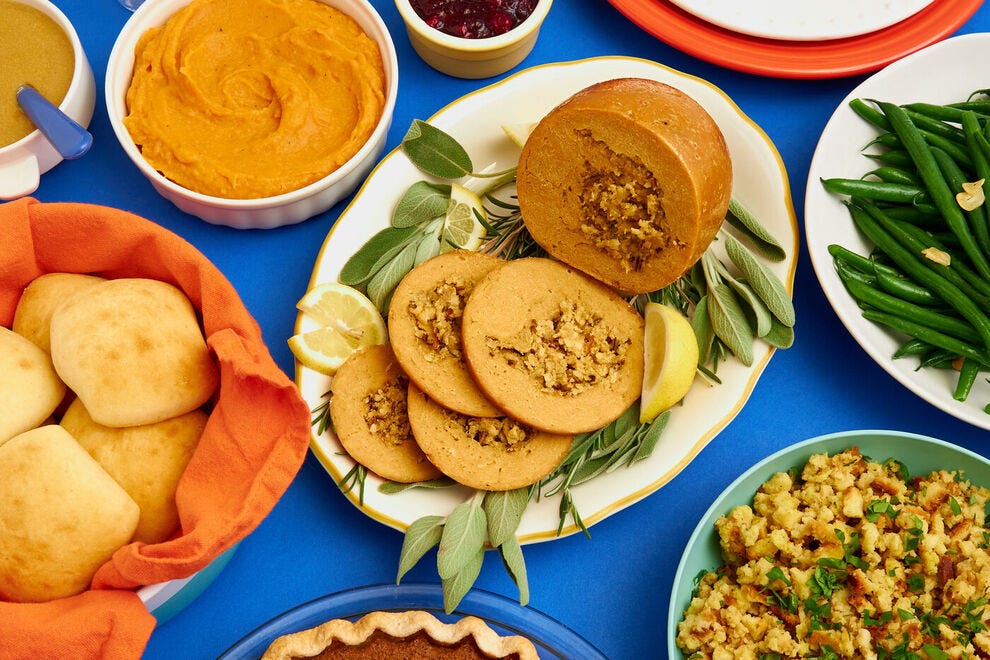 Tofurky roasts have been a part of celebratory dinners since 1995, and a special Tofurky Feast box is offered every holiday season. The Tofurky Feast comes with the Tofurky Roast & Gravy, which is also sold separately, along with a dessert. This year, the feast includes a creamy, chocolate cheesecake that’s, of course, vegan. The flavorful cheesecake also has a java flavor but no caffeine. 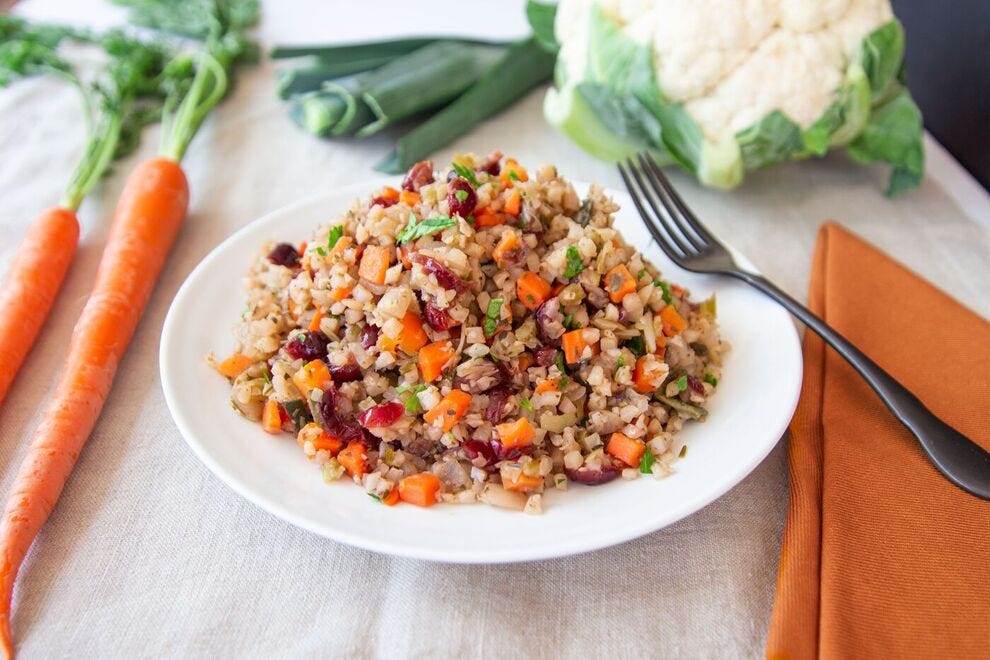 Tattooed Chef’s Riced Cauliflower Stuffing is a delectable vegan side dish that was newly released in October 2021. It’s a healthier take on a traditional holiday dressing. Instead of being made with breadcrumbs, riced cauliflower is its base. It also has carrots and dried cranberries, is made with vegetable broth and is seasoned with onions, leeks, celery and herbs.

Unlike traditional stuffing, it’s ready in minutes without any complicated preparation. That’s a win for any holiday! 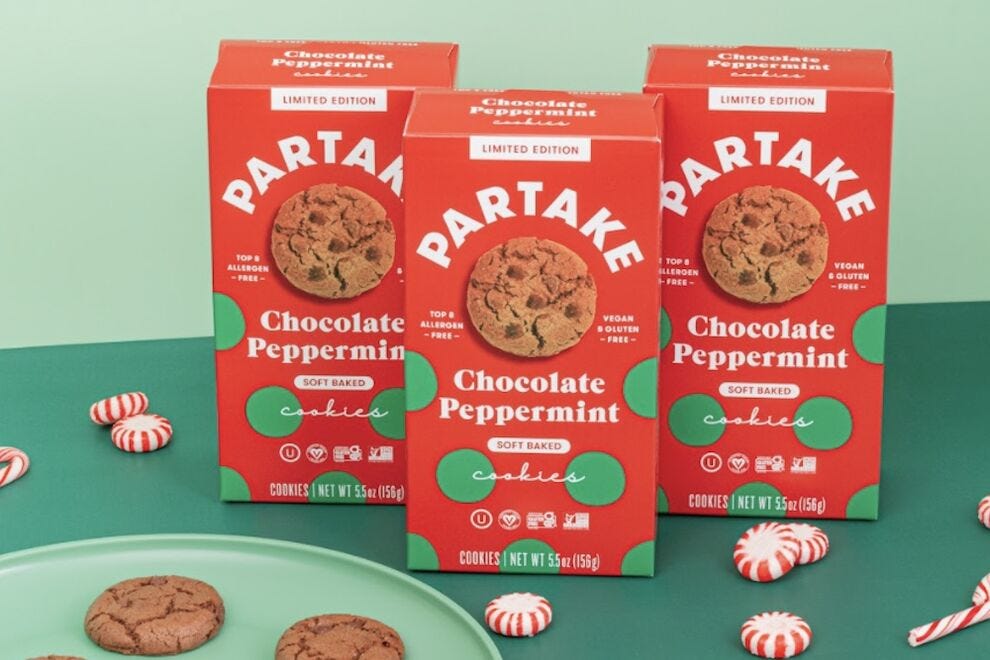 Soft baked and decadent, the Partake Chocolate Peppermint Cookies are so good that you may want to get extra boxes to take to every holiday party you attend this season. The limited edition flavor is just the right mix of melt-in-your-mouth fudgy goodness and cool peppermint.

Partake cookies are always vegan, gluten-free and free of the top 9 allergens. In addition to this festive flavor, the company also offers a Crunchy Holiday Sprinkle and Soft Baked Pumpkin Spice cookies. 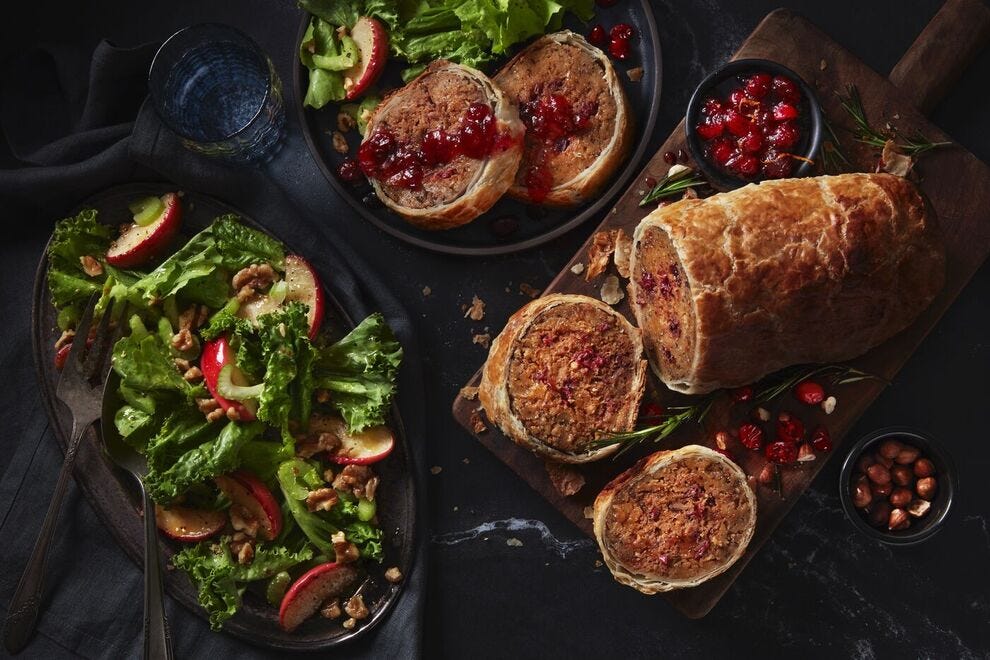 There’s a lot to love about the Field Roast Hazelnut & Cranberry Roast. It takes classic holiday flavors that you wouldn’t necessarily imagine would go well together, yet they taste perfectly matched. Candied ginger, hazelnuts and rosemary are part of the roast’s sweet and savory flavor profile, and it’s wrapped in a mouthwatering flaky puff pastry. Who could resist that? 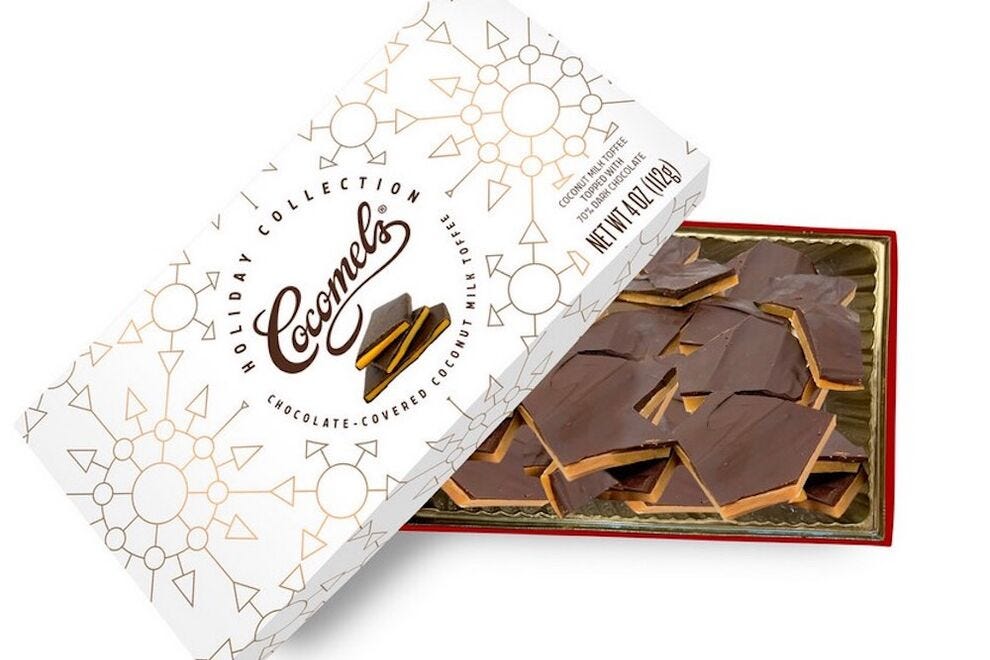 Any vegan who misses the rich, creamy decadence of caramels will adore Cocomels treats. They make caramels that are better than any dairy-based sweets. Pumpkin spice lovers should try their seasonal pumpkin spice caramels. 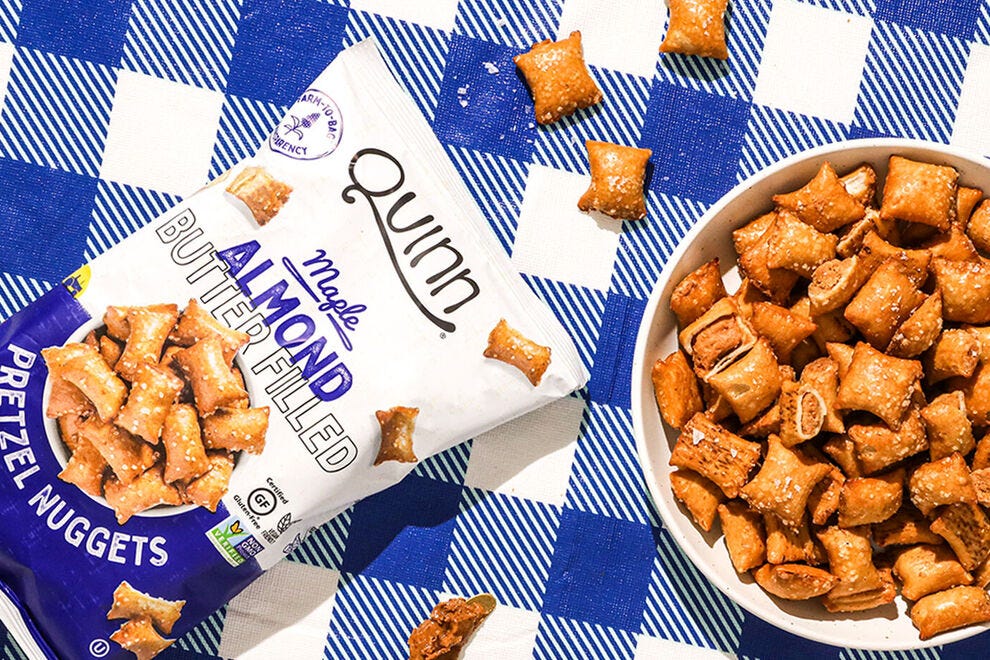 Snacking during the holidays often means munching on sugar cookies, but sometimes you want to expand your palate. Quinn’s Maple Almond Butter Pretzel Nuggets are a great choice and probably aren’t what you might first expect from a pretzel snack. They’re sweet and full of flavor, made with whole grain sorghum which is naturally gluten-free. 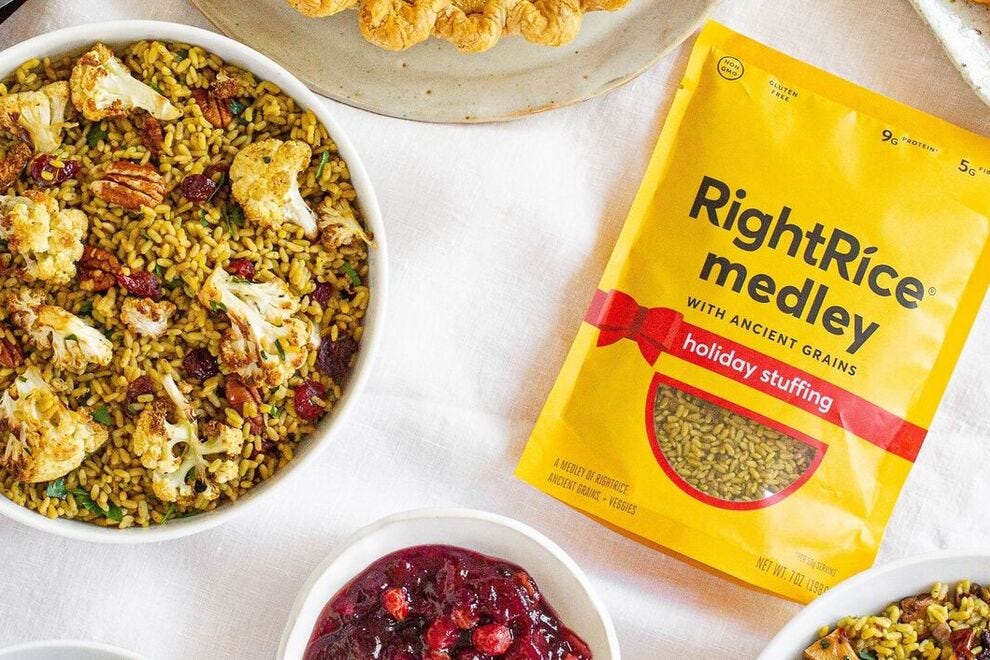 If you’re looking for a healthier alternative to traditional stuffing this year, consider RightRice’s two holiday flavors. The Holiday Stuffing RightRice Medley is a protein-packed rice that’s made from vegetables such as lentils and chickpeas. It has fewer carbs than regular stuffing and is higher in fiber. Try it to experience savory flavors like rosemary, onion and thyme.

Then there’s the Brown Butter Sage RightRice with flavors of brown butter, toasted nuts and a hint of sage. Both options are healthy and tasty. 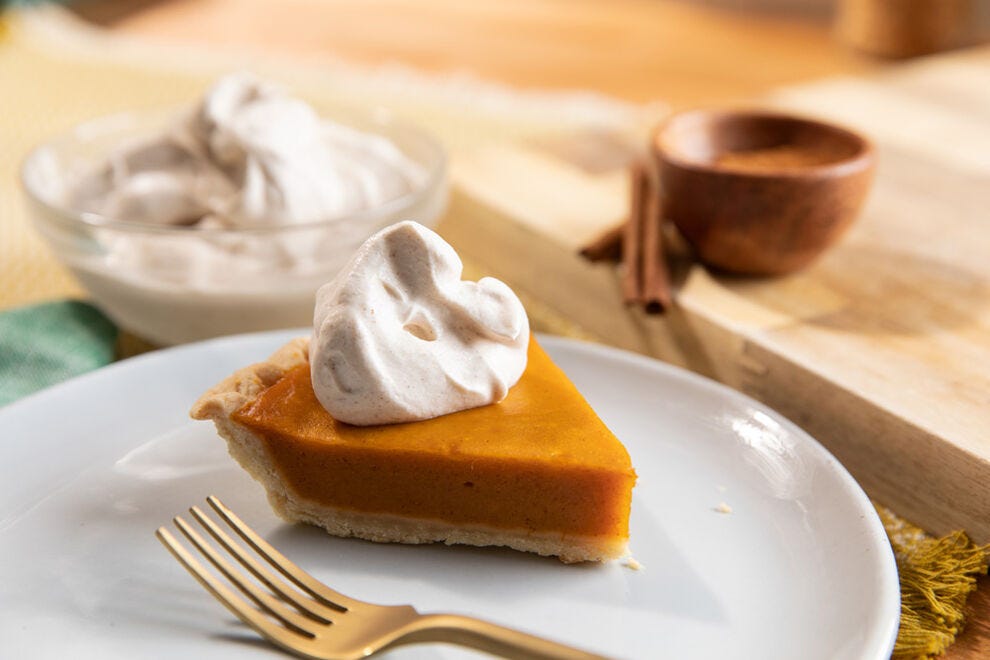 As the first-of-its-kind vegan whipping cream, Silk Dairy-Free Heavy Whipping Cream is the perfect foundation for rich, creamy sauces and soups. It’s also great as a topping to hot chocolate and pumpkin pie throughout the holiday season.

You can use it cup-for-cup just like you would dairy-based whipping creams. Those who are watching their sugar will appreciate that this treat has 0g of sugar per serving. 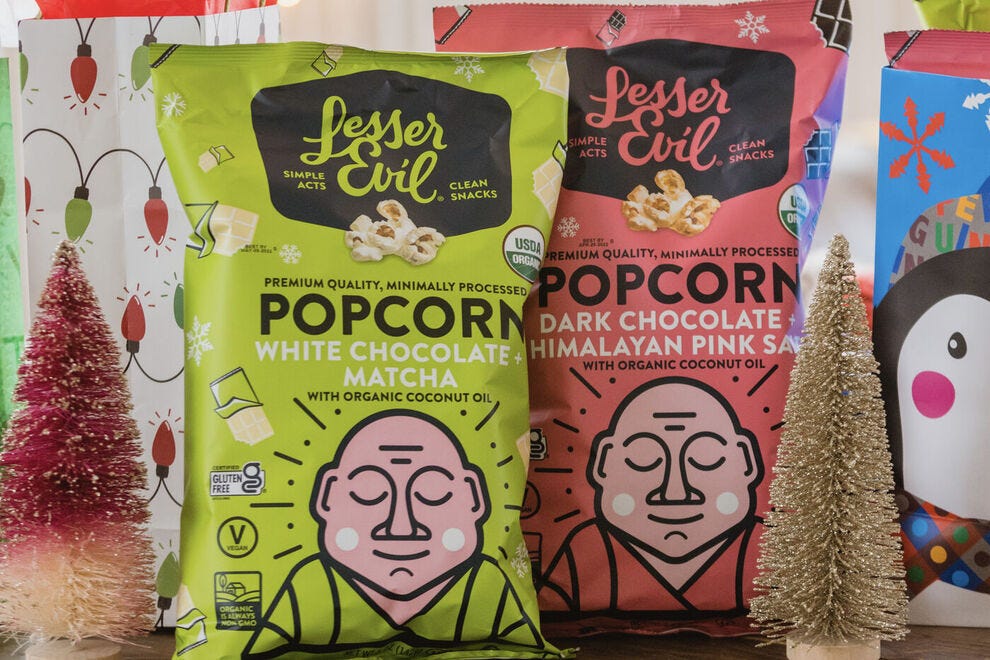 Who doesn’t love a good holiday snack? LesserEvil’s sweet popcorn is a satisfying choice. They released two new flavors for the holiday season this year: White Chocolate + Matcha and Dark Chocolate + Himalayan Pink Salt. Both flavors are as unique as their names suggest, and they’re sweet with just the right amount of kick.

If you want to start with just one, you can’t go wrong with the Dark Chocolate + Himalayan Pink Salt. It’s mouthwatering even if you don’t usually like dark chocolate. 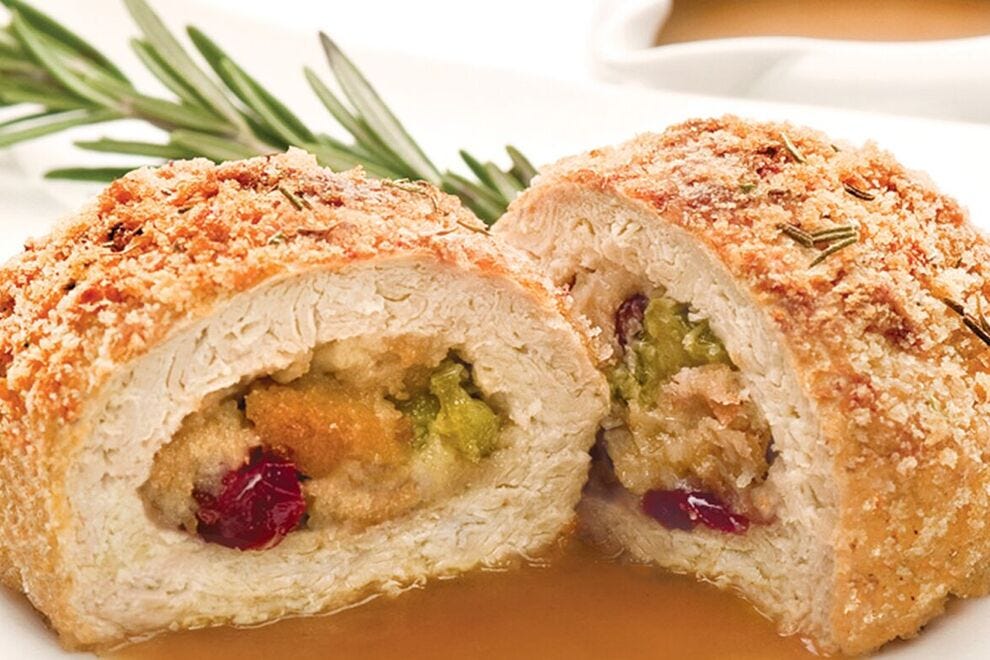 Available as both a large roast that will serve a family of five and a small roast that serves one, Gardein’s Stuffed Turk’y is a savory centerpiece that’s appetizing enough for any holiday feast. It’s a traditional vegan turkey that’s stuffed with a dressing of wild and brown rice, cranberries and kale. The accompanying rich, homestyle gravy completes the roast.

Talk about being both healthy and tasty! It’s especially great served with side dishes like mashed potatoes with vegan gravy, green beans, a sweet potato casserole and roasted vegetables. 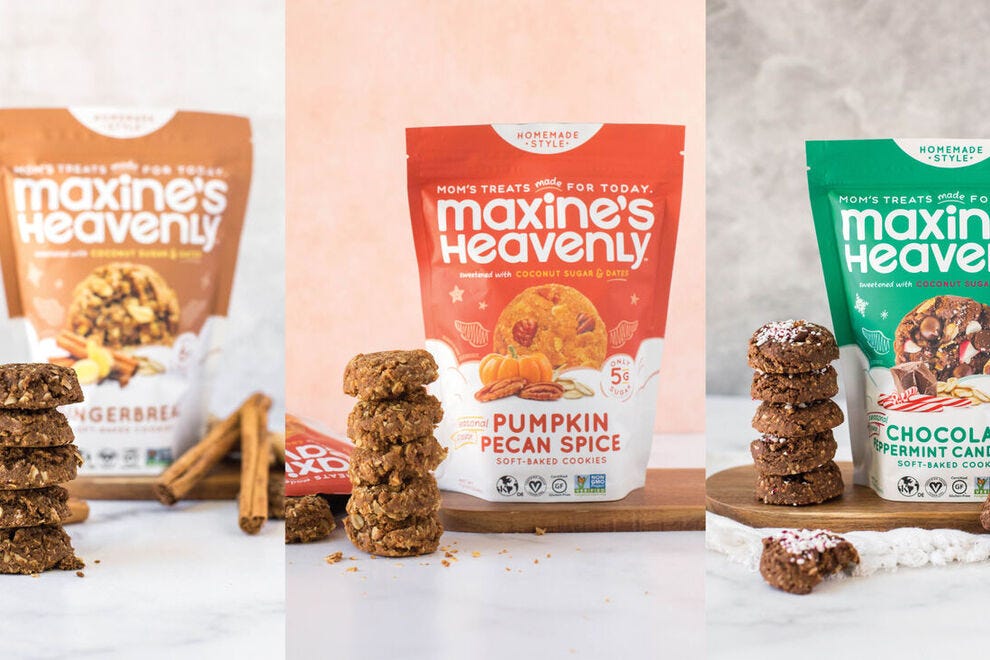 If you like pecan pieces and a soft dough, you’ll love the Pumpkin Pecan Spice. The Gingerbread option is perfect for those who miss classic gingerbread cookies, and the Chocolate Peppermint Candy Cane may bring up happy memories of hot chocolate and candy canes, yet it offers the best of both worlds. 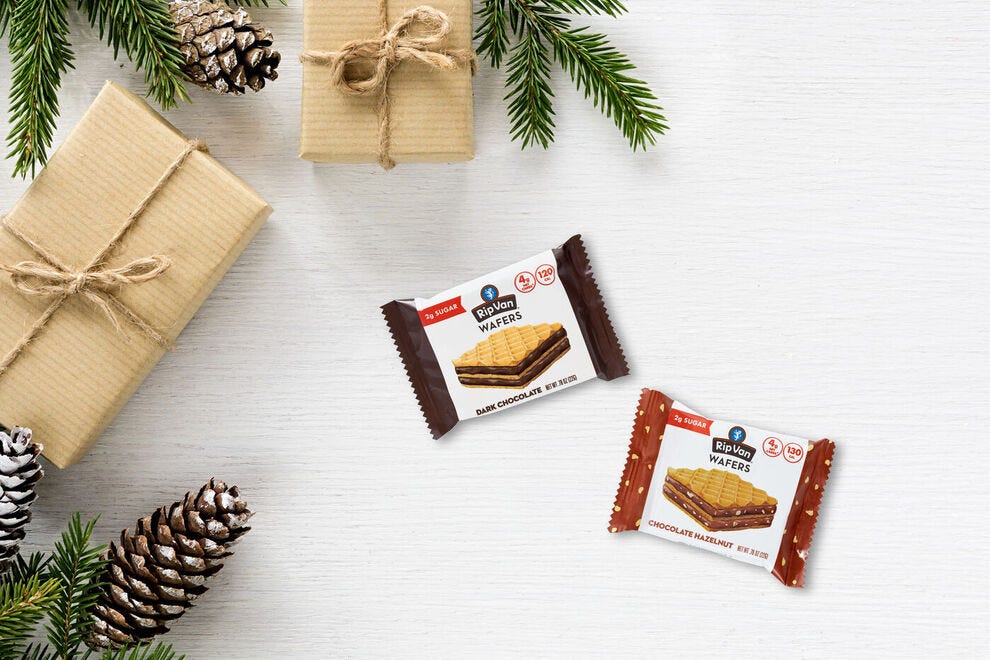 Are you looking for a treat that’s satisfying but not overly sweet? Rip Van Wafers make the best possible accompaniment to your after-feast coffee. Their dark chocolate and hazelnut flavors are completely vegan (and completely delish!). They’re also keto-friendly with only 4g net carbohydrates per serving.

The best way to eat them is to dip them into your coffee drink, then savor all the flavors in each bite. 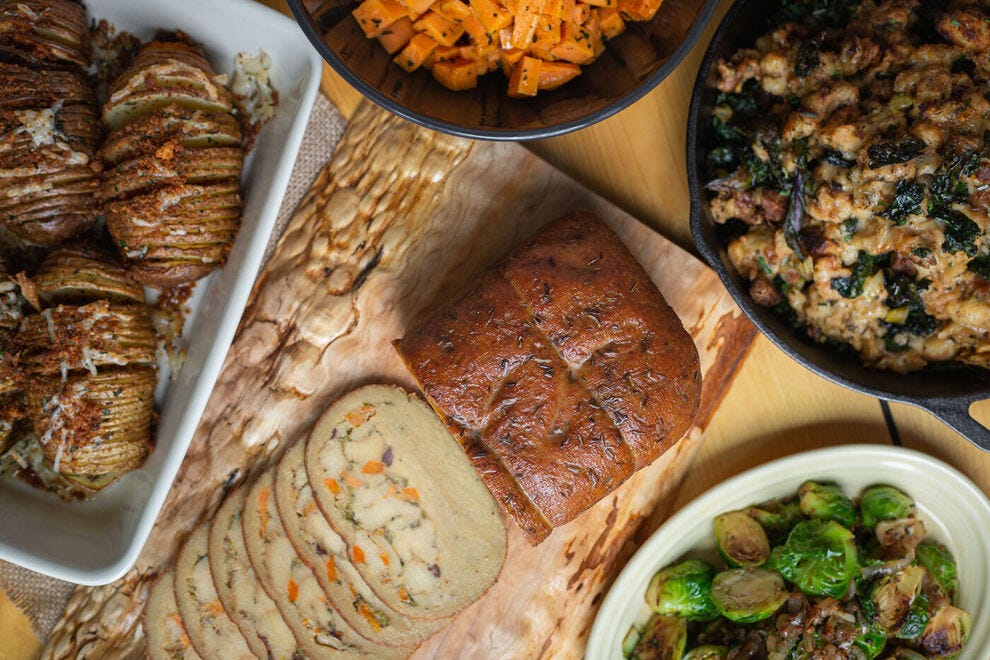 The Very Good Butchers Thanksgiving Box is also great for Christmas and every other winter holiday where you want plant-based, meaty dishes for a satisfying feast that feeds four to six people. It includes the stuffed beast (a vegan roast), a British banger pack, pepperoni, a breakfast sausage and a bratwurst sausage. Also check out the Festive Box.

They’re basically a dream for meat lovers who are ready for a vegan adventure. 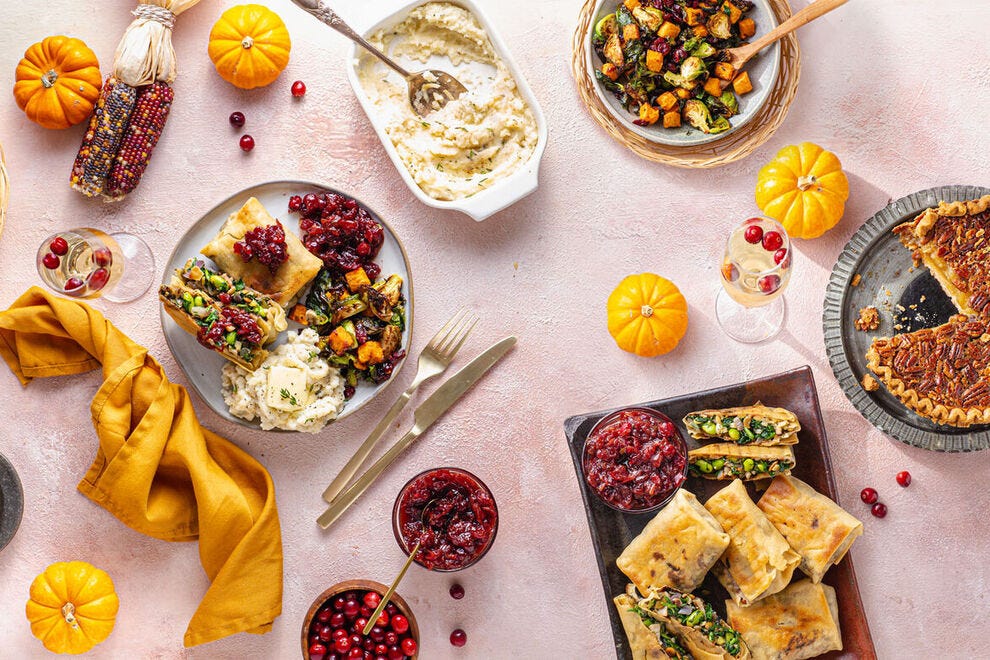 They’re terrific served with cranberry chutney (also, don’t forget the mashed potatoes with vegan gravy). They’re also great on a platter for a holiday party or as a non-traditional ingredient in a classic seasonal recipe. 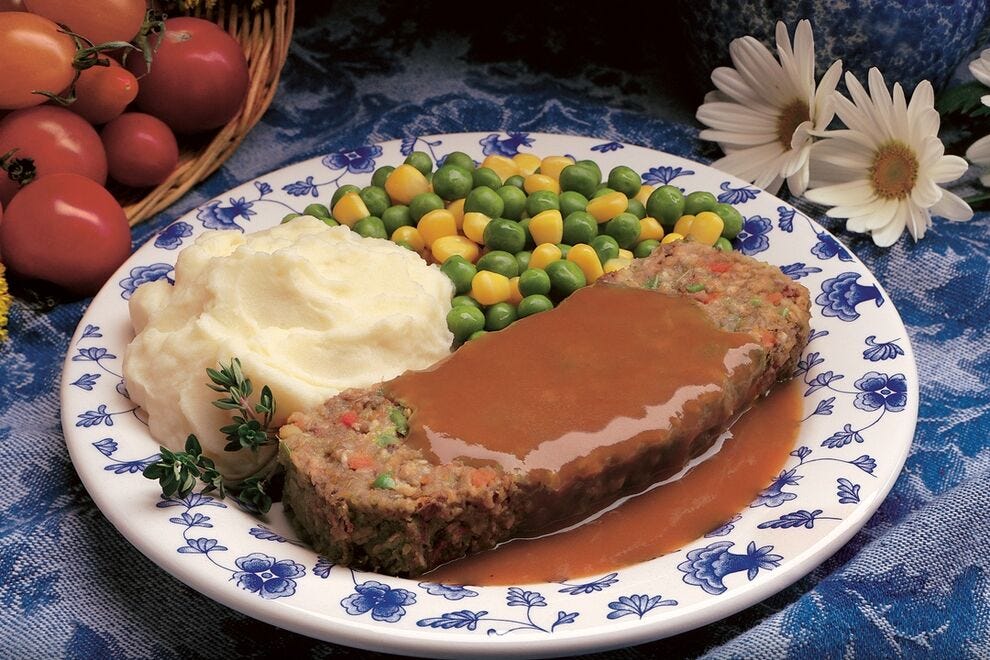 Who has time to cook during busy winter days when you’re decorating, preparing for the holidays and tending to all of life’s other responsibilities? Amy’s Kitchen has a scrumptious veggie loaf frozen meal that offers the perfect solution. It’s great when you need a quick meal that’s nutritionally sound, filling and ambrosian.

The veggie loaf is smothered with a one-of-a-kind gravy with a sweet kick, and it has mashed potatoes, peas and corn on the side. (Fun tip: Spread some gravy over the potatoes and veggies. There’s enough to go around!) 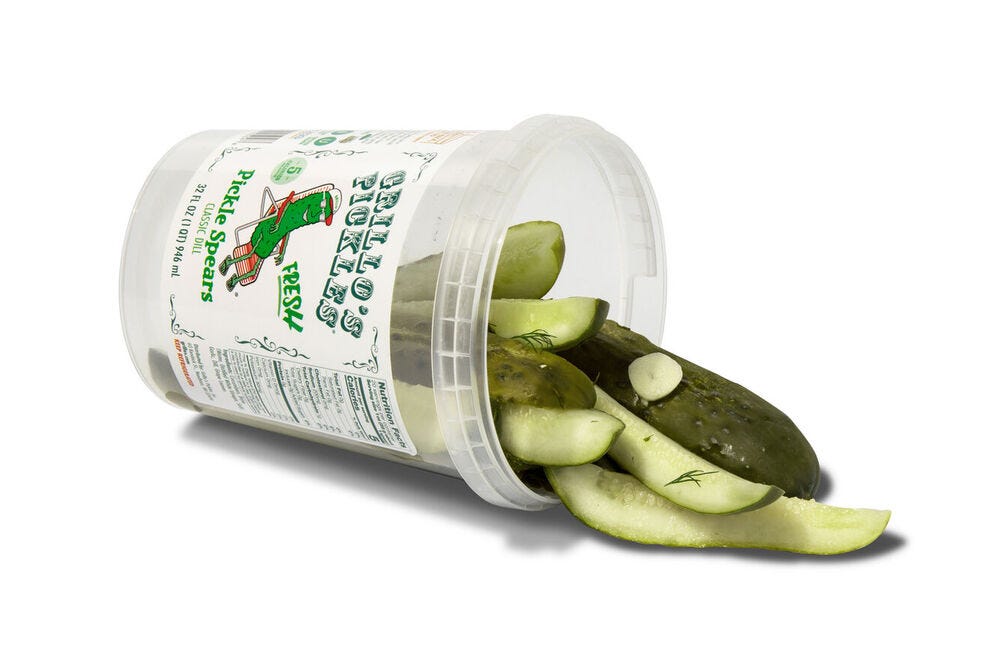 Grillo’s Pickles are a good staple for the holidays that easily match and enhance all the festive flavors throughout the season. The dill pickles are crisp, refreshing and cool to crunch on. They’re made with only a few ingredients: cucumbers, brine, garlic, dill and grape leaves. They’re vegan, kosher and fat-free. 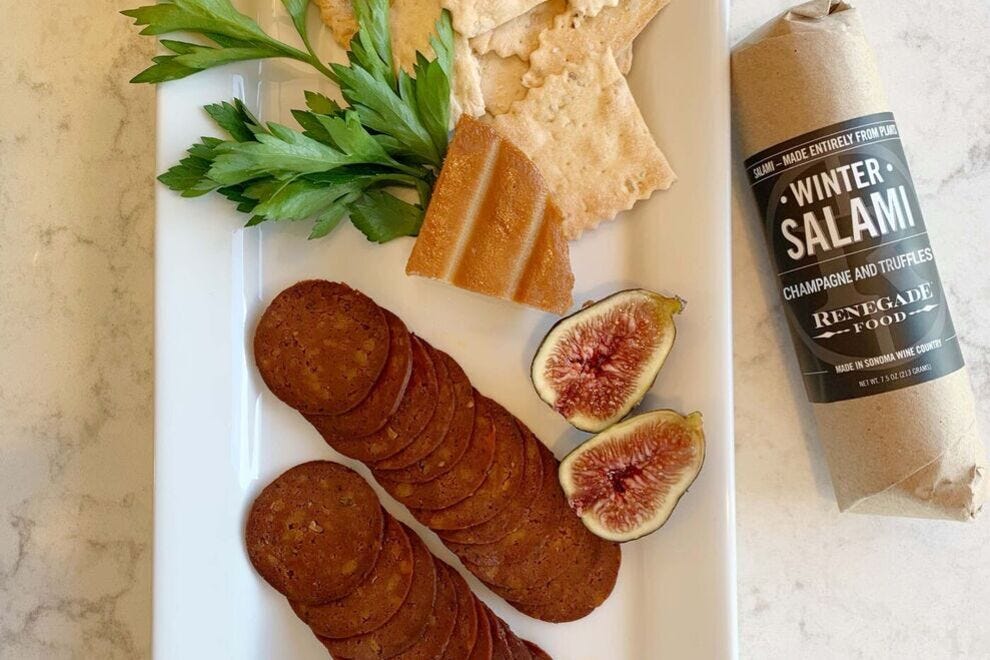 Renegade Foods makes premium organic salamis entirely from plants. This year, they debuted a Winter Salami that pairs earthy truffles with the refreshing flavors of crisp champagne. Guests may understandably want to dig into this salami before the main course!

It was created by a chef to be enjoyed with holiday celebrations, and they recommend pairing it with a dry, sparkling wine or an aromatic merlot. 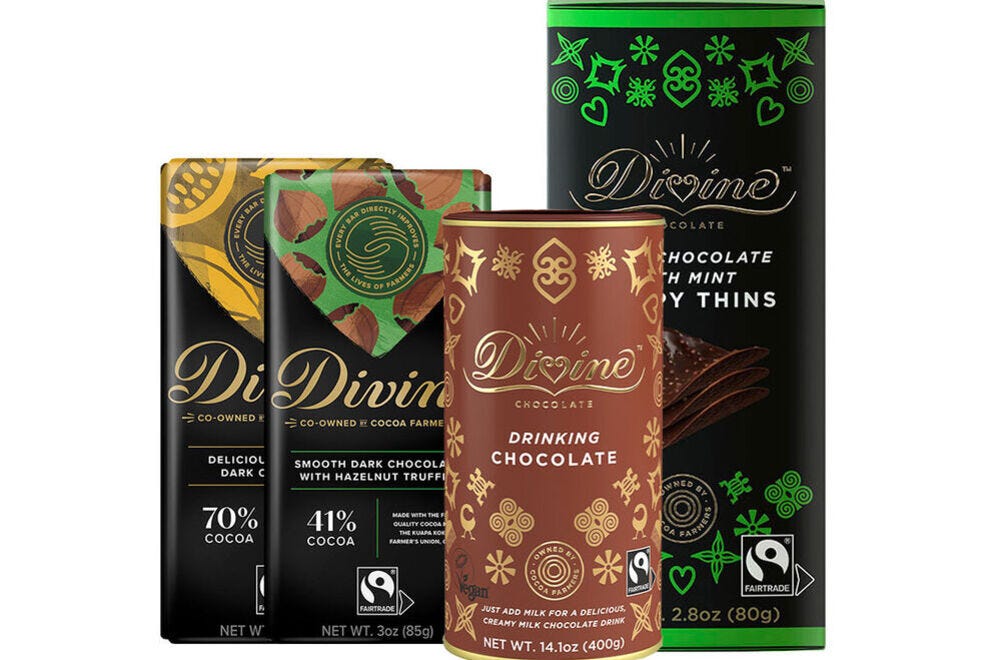 Divine Chocolate lives up to its name with the vegan variety pack for the holidays. With one look at all the chocolate in the pack, you might not know where to start, but we’d recommend mixing the drinking chocolate with oat milk for the perfect holiday drink. 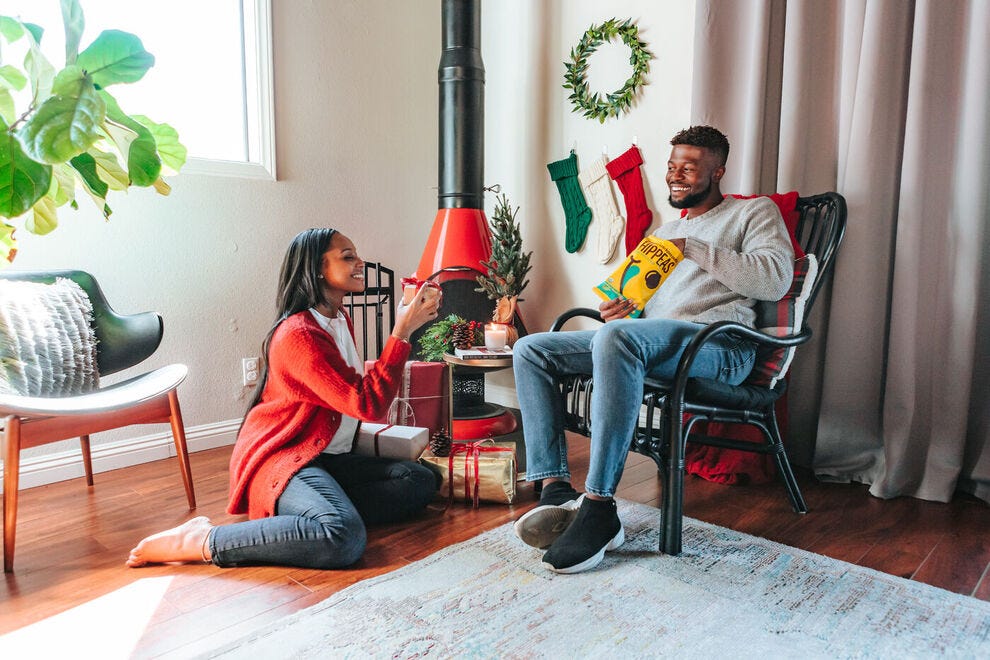 HIPPEAS spread “peas and love” for the holidays, and they offer conveniently packaged, flavored puffs that are on the healthy side of snacking. Their organic chickpea puffs are baked instead of fried, and they have 4 grams of protein as well as 3 grams of fiber.

The flavors include Nacho Vibes, Sriracha Sunshine, Vegan White Cheddar and Bohemian Barbecue. Bring some to share at your holiday gathering and nobody will guess they’re vegan unless you tell them.