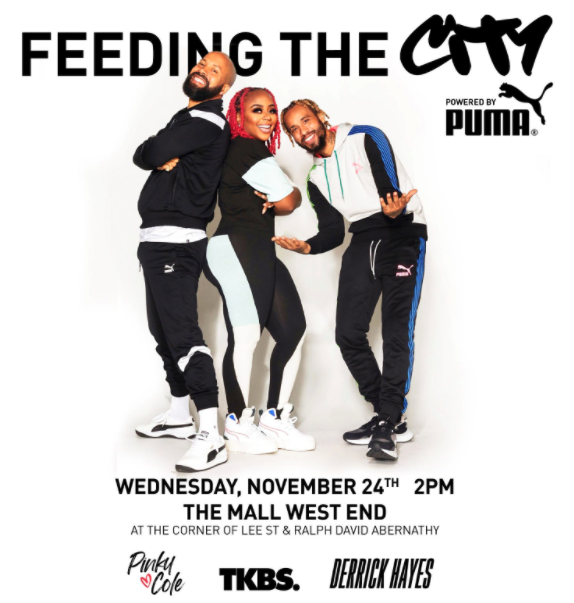 Powered by PUMA, The Event Will Take Place on Wednesday, November 24 at the Mall West End. The event will be Free & Open to The Public & Offer Guests a Limited Edition Thanksgiving Egg Roll

“While celebrating a holiday that’s centered around feeding others, gathering together and expressing gratitude, I’m honored to be working with fellow Atlanta entrepreneurs and friends to give back to our neighbors,” says Cole. “We owe the community so much thanks for supporting us, and we can’t wait to show our appreciation with some delicious vegan food to kick off the holiday season.”

Thirty four-year-old restaurateur and philanthropist Derrick “D” Hayes is the CEO & Founder of Big Dave’s Cheesesteaks and the co-founder of vegan cheesesteak concept Dinkies – the vegan food kiosk inside Bar Vegan offering vegan Cheezesteaks, vegan Cheezesteak Eggrollz and Quesadillaz, Philly-style – in partnership with Slutty Vegan ATL Founder Pinky Cole. Hayes aims to merge his passion for community, food and business. In 2014, what started as a small water-ice shop in a 749-square-foot Shell gas station in Dunwoody, Georgia has now augmented into the nationally known Big Dave’s Cheesesteaks, a thriving cheesesteak empire with a storefront and mobile locations across metro Atlanta. Along with feeding the community, Hayes takes pride in his businesses being “bigger than food.” Placing much importance on providing high-quality, hand-made food and lending a helping hand to those in need – whether offering free meals to customers, feeding local frontline workers or employing the communities’ youth – Big Dave’s Cheesesteaks lives up to its motto with the business philosophy being rooted in community involvement, quality food and exceptional customer service. Big Dave’s Cheesesteaks has been featured in ABC News, The Philadelphia Inquirer, Daily Mail, TMZ, Black Enterprise, Yahoo and more.

Kenny Burns is an entrepreneur, producer, trendsetter, author, brand developer, marketer, mentor, motivational speaker and most of all, a loving father and husband. His professional journey is all-inclusive of his moniker “The Lifestyle Specialist.” Kenny Burns’ 20-plus year career has organically woven across the entertainment, music, fashion, spirits, radio, television and marketing industries. Early in his career, he worked with the likes of songstress Monica, living legend Jay Z, and his first music concept Dream, the all female pop group that debuted at #2 on Billboard – the biggest debut since Spice Girls. As an executive, he continued to achieve platinum success with Mariah Carey’s Monarch Music, signing international music superstar Akon, discovering fellow Washingtonian hip-hop artist Wale and becoming VP of the iconic hip-hop music label Roc-A-Fella Records.

His passion to create led him to RyanKenny, the second Black American designer retailed in Saks Fifth Avenue, and the development of his first documentary B.U.R.N.S. (Be Ultimately Real Never Sellout) that premiered at the 2010 ABFF (American Black Film Festival). Kenny Burns’ unconventional expertise has been trusted by some of the world’s greatest brands, including Amazon, Pepsi, Moet Hennessy, Puma, Heineken and Grey Goose Vodka to name a few. In 2013, he joined mogul Sean “P Diddy” Combs to lend his skills to Mr. Combs’s business portfolio that included the launch of REVOLT TV, Aquahydrate, DeLeón Tequila and CÎROC Vodka. In 2018, he partnered and invested in Uncle Nearest Premium Whiskey, the fastest growing American Whiskey in US history. The Kenny Burns Show (TKBS) was reborn during the pandemic and now holds the #1 spot Monday through Friday from 2-6pm on Atlanta’s V-103 radio station. Through years of building genuine relationships across industries and creating powerful influence for brands, tastemakers and celebrities alike, Kenny Burns’ ability to inspire, create and execute are undeniable. A driven businessman determined to rise to every occasion through his hard work and dedication, Kenny Burns has and will continue to prove that what you dream you can achieve. #TheDreamIsReal