…while baby boomers are leading the way when it comes to shopping local.

A study of a selection of UK adults has examined the things different generations are doing to help the environment, with those aged 18-24 nearly twice as likely to have made ‘green’ changes to their lifestyles than those over 60: the baby boomer generation. The younger generation also came out on top when it comes to using reusable nappies and sanitary products and buying shampoo and conditioner bars, both a benefit to the planet and their purses. 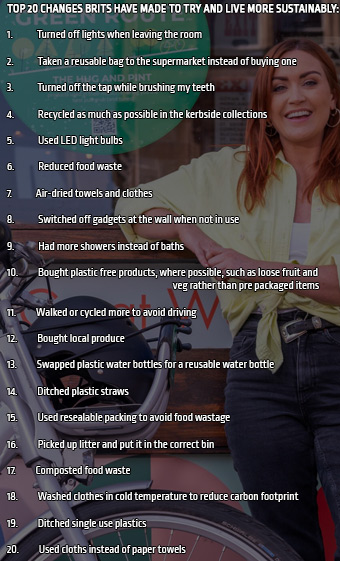 However, baby boomers are leading the way when it comes to air-drying clothes rather than tumble drying, protecting the planet and the longevity of their garments, as well as buying loose fruit and veg to cut back on plastic and composting their food waste. They are also most likely to grow their own fruit and veg, turn off lights and gadgets when they aren’t in use and cycle or walk to avoid driving.

“It’s great to see that everyone is making an effort to go green, but there are some interesting differing habits between age groups. While younger people are more likely to make more dramatic lifestyle changes such as changing their diet or the way they shop, older people are going back to what they know from their childhoods by air drying clothes and ditching the car and doing a collection of smaller things that collectively make a big difference.

“We can all make small changes to do our bit and live better. It’s great to see that no matter our age, we’re all getting behind fighting the climate crisis.” – Colin Banks, Head of Sponsorship & Partnerships of green power company OVO

OVO, which commissioned the research to mark the launch of its bike-share scheme in Glasgow, Cardiff and The Vale, also discovered 86 per cent of adults, in the poll, consider themselves to be environmentally friendly in the way they live and shop.

And more than half (52 per cent) would be prepared to pay an extra 11 per cent for a version of a product that is more environmentally friendly than cheaper alternatives, as 27 per cent often feel guilty about the things they do and the impact it has on the environment.

This is also true for how Brits travel, as more than half (56 per cent) want to explore more sustainable travel options, with more than a quarter (27 per cent) wanting to swap driving for cycling in order to reduce their carbon footprint. Despite this ambition, the study, carried out via OnePoll, found the reality is that motor car is still the most popular way for Brits to commute to work, being used by 28 per cent of adults.

Fewer than one in 20 regularly cycle to their workplace, and just six per cent are likely to catch the bus when they need to commute showing how bike schemes can make it easier for these Brits to make their ambitions a reality.

“We have created the new green routes, a map for residents and visitors to use with the new OVO Bikes in Cardiff and Glasgow, to explore a selection of sustainable spots and support the local economy.” – Colin Banks