Los Angeles is arguably the best place in the nation to experience the bold flavors and spices of Mexican cooking. But, it’s also one of the best places to find satisfying vegan options for these spicy dishes. Showcasing the best and brightest of LA’s Mexican scene, these vegan burritos below are seriously delicious. If you’re craving an explosion of flavors, check out our full list of the best vegan burritos in LA.

If you’re searching for the best vegan Mexican options in LA, Cena Vegan is an iconic name that constantly pops up—but there’s a reason for this fame. Cena Vegan’s Mexican eats are some of the best in the city, with an entirely vegan menu that boasts fresh ingredients and bold flavors. Their Big Vegan Burrito is no exception. Filled with your choice of Plant Ranch vegan protein—carne asada, pollo asado, al pastor, carnitas, barbacoa, or birria—and a tasty combo of beans and rice, Cena Vegan’s burrito is wrapped in a warm flour tortilla and ready to eat. Choose from a wide selection of salsas and condiments like pico de gallo, guacamole, spicy birria salsa, and chipotle cashew crema to make it your own! Looking for a low-carb option? Cena Vegan’s burrito bowl offers the same delicious flavors without a tortilla. 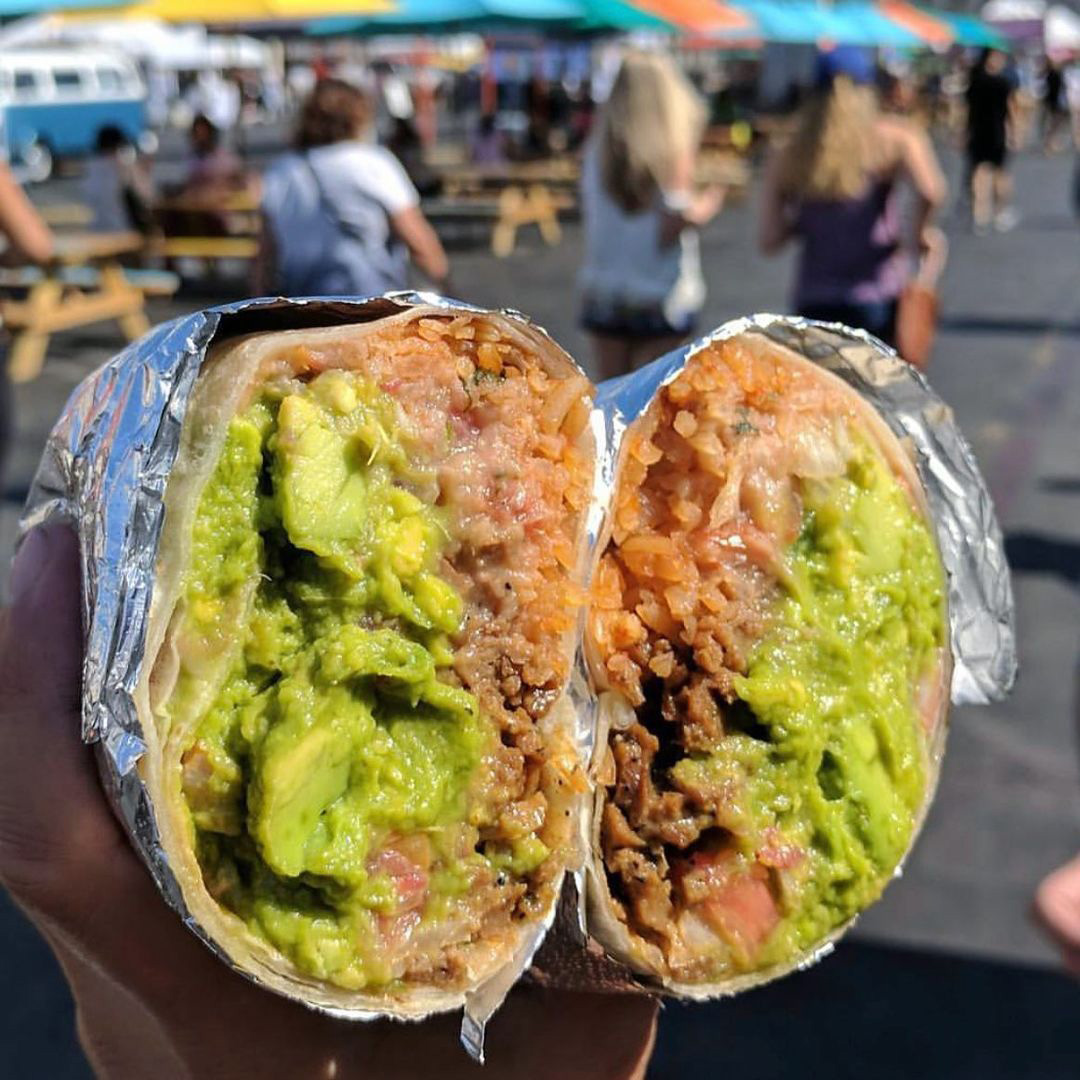 El Cocinero has vegan Mexican food down to a science. Aside from serving up astonishing vegan tacos, tortas, and quesadillas, El Cocincero’s vegan burritos are first-rate—sure to please vegans and non-vegans alike. All of their burritos come with your choice of vegan protein—soy al pastor, soy asada, soy chick’n, jackfruit carnitas, soy chicharrón, and a jackfruit/soy birria—alongside a combo of fresh cabbage, pico de gallo, refried beans, and rice. With add-ins like avocado salsa, mozzarella cheese, chipotle mayo, cashew crema, and habanero salsa, you can truly customize your burrito to your personal taste. The best part? El Cocinero offers burrito bowls, too! 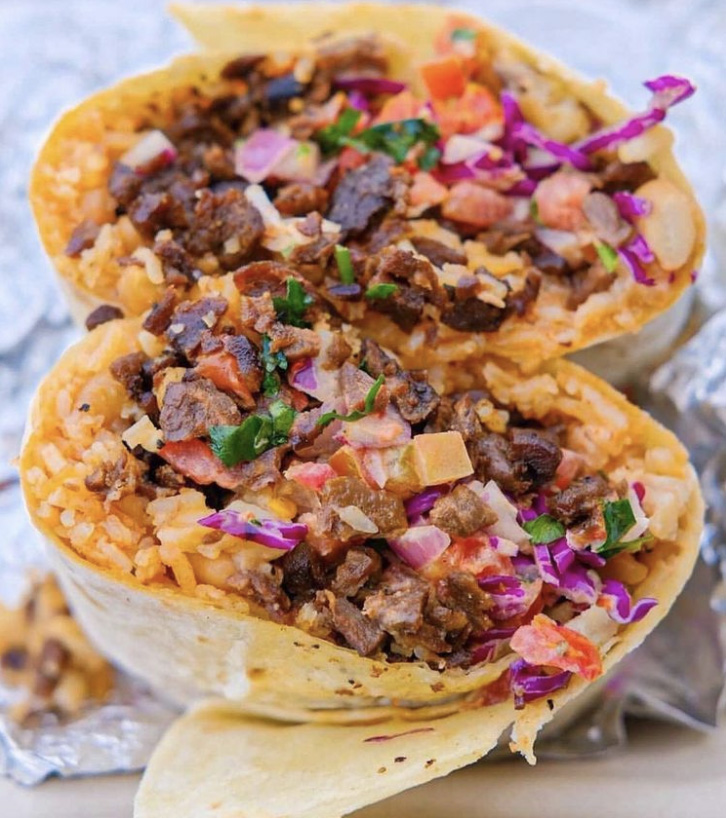 With their next-level vegan burritos, this women-owned restaurant should 100% be on your bucket list of LA Mexican spots to try. With a build-your-own style, Sugar Taco’s Burrito comes with black beans, rice, salsa, pico de gallo, and your choice of savory vegan protein—carne asada crafted from house-made seitan, soybean pollo, seitan al pastor, or jackfruit carnitas. The best part? Sugar Taco has a wide variety of add-ons, including seasonal veggies, guacamole, nut-free queso, crema, and a pineapple jalapeno hot sauce, so you can create your own tasty combination. 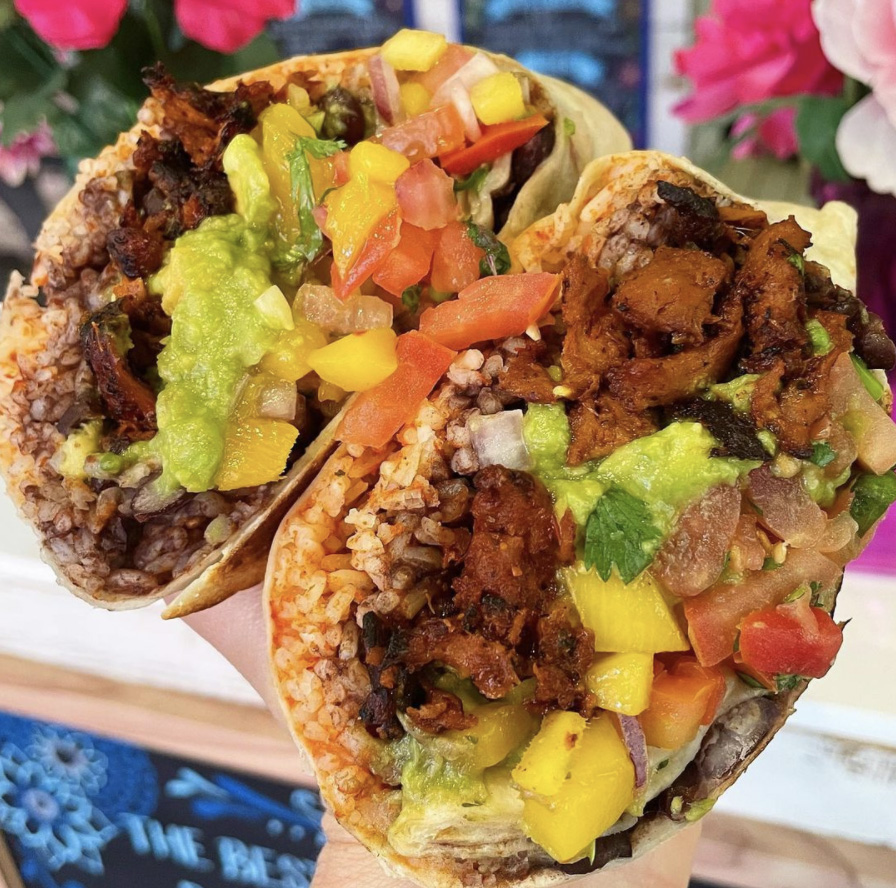 Located in the heart of Hollywood, Doomie’s NextMex boasts an all-vegan menu guaranteed to please. While they offer quesadillas, nachos, and flautas, their burritos are definitely the fan-favorite. With an all-star collection of vegan meat offerings, including al pastor, chile verde, asada, pollo, carnitas, mole chicken, Korean BBQ, and Baja artichoke, Doomie’s NextMex certainly has a plant-based meat option for everyone—combine with rice and beans to make an excellent burrito! Looking to spice up your burrito routine with something different? Make it a wet burrito or deep fry your burrito for an extra few dollars—the taste is surely worth it! 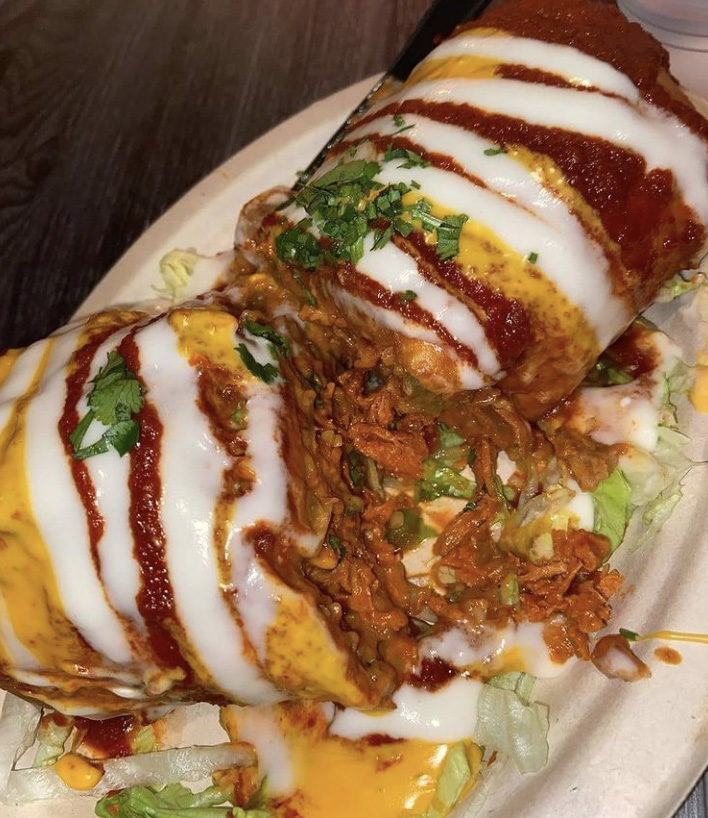 There’s no place that does burritos quite like Taco Vega does. With four different burrito options on their 100% plant-based menu, Taco Vega has something for everyone! Are you a fan of keeping it simple? Go with their OG burrito, with roasted yam, black beans, Spanish rice, chipotle tahini crema, and pickled red onion. If you’re feeling adventurous, try their supreme burrito (made with seasoned quinoa) or their extra-spicy California burrito (stuffed with grilled oyster mushroom asada). The best part about Taco Vega? Their breakfast burrito (filled with a tofu scramble, farro chorizo, black beans, cheddar, and pico de gallo) is served all day. Make sure you save some room for dessert, because Taco Vega’s fresh vegan churros and rice pudding are both excellent ways to finish off your meal! 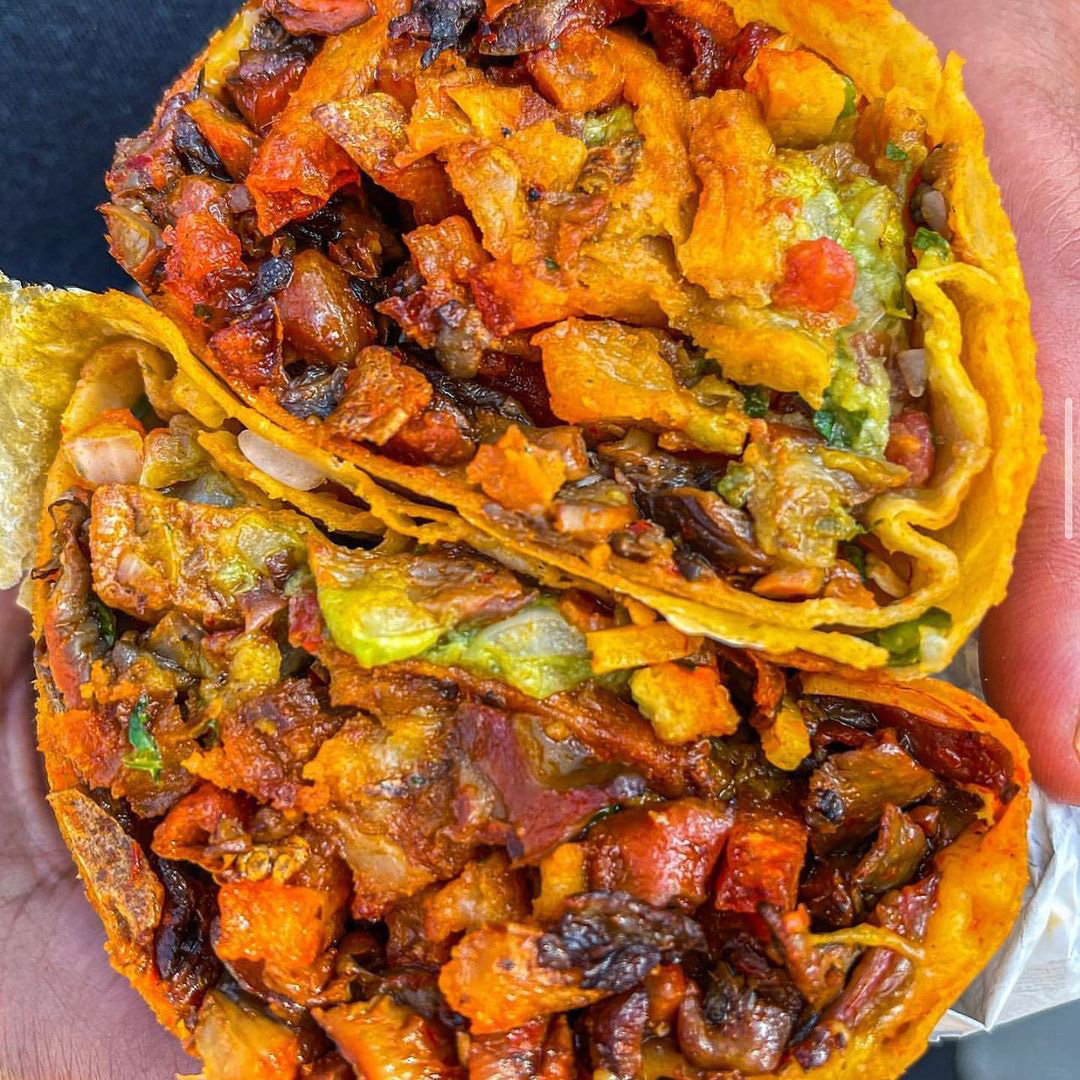 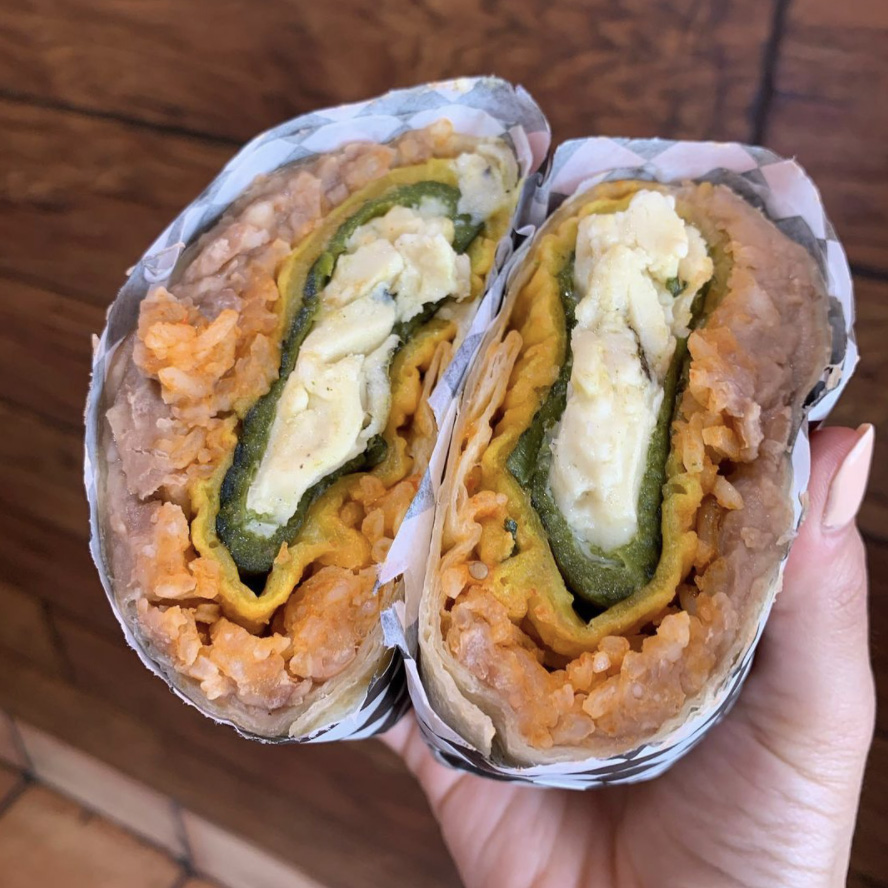 If you’re looking to start your morning off right, Flaco’s plant-based breakfast burrito—served all hours of the day—should be on your radar. Flaco’s Vegan Breakfast Burrito is filled with scrambled JUST Egg, Daiya cheddar cheese, purple potatoes, pico de gallo, avocado, and cilantro crema. While Flaco offers other innovative vegan eats, their colorful burritos are top-tier, and they certainly don’t skimp on flavor. All wrapped up in a Sonoran-style flour tortilla, this vegan burrito is an LA burrito staple. 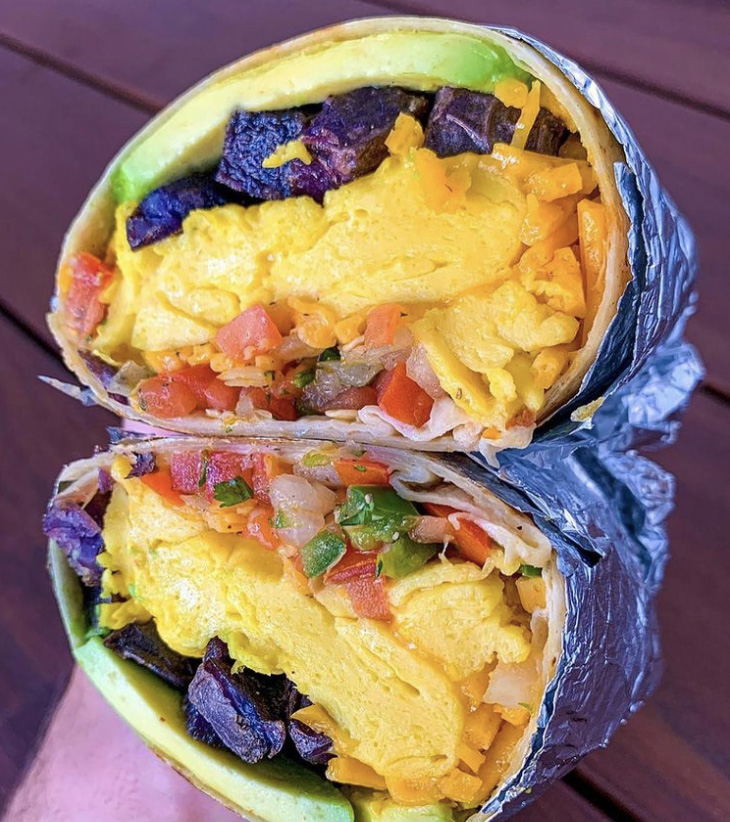 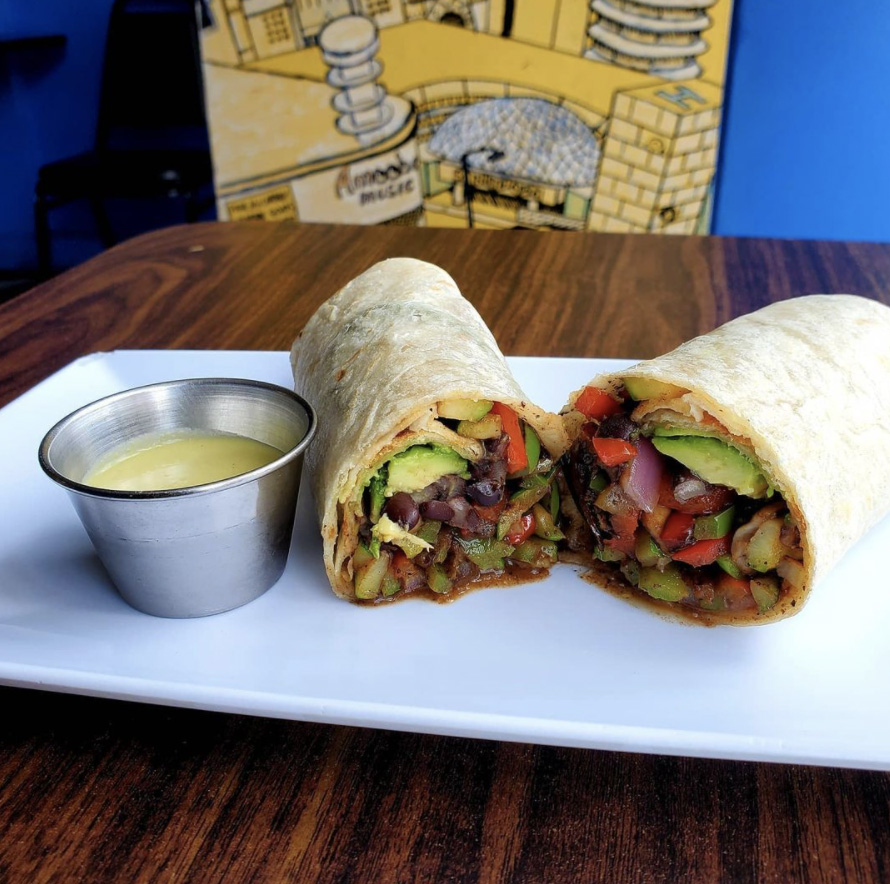 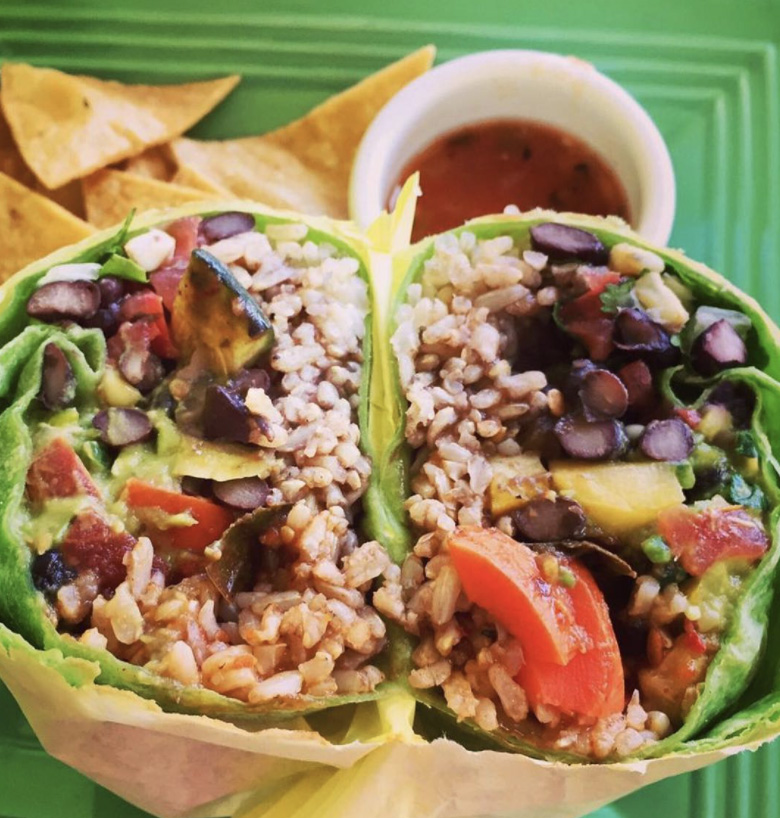 Silver Lake’s Las Glorias Del Buen Comer has a mass of fans from all over LA who praise the shop’s ability to incorporate authentic Mexican flavors into plant-based creations. With a wide variety of vegan Mexican options available, this spot’s burrito is clearly supreme. Las Glorias Del Buen Comer opts to keep it simple with their standard vegan burrito being served with rice, beans, guacamole, onions, and cilantro, and your choice of soy chicken or beef. We promise this burrito is worth the trip!

Leonor’s Mexican Vegetarian Restaurant truly has it all in terms of burritos. With a wide selection of breakfast burritos—like their Bacon Breakfast burrito, Sausage Breakfast burrito, and more—Leonor’s also offers an appetizing standard burrito, as well. This burrito comes with brown rice, steamed pinto beans, cheese, avocado, chopped tomatoes, red onions, and plant-based meat—all wrapped in a whole wheat tortilla. Just be sure to specifically ask for vegan cheese and you’re all set! Feeling adventurous? Try out their Chili Burrito or Doug’s Delight Burrito, served with a spicy Bolivian sauce. 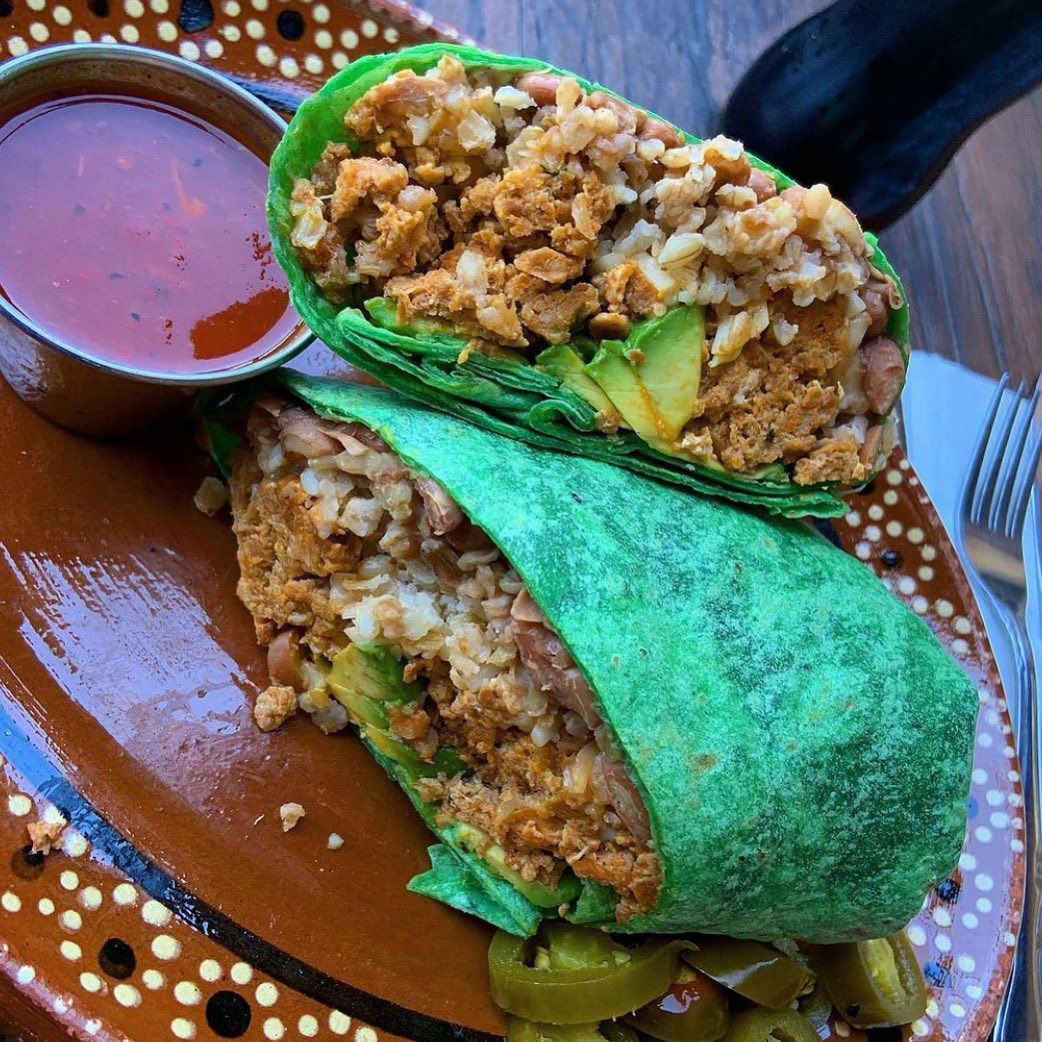 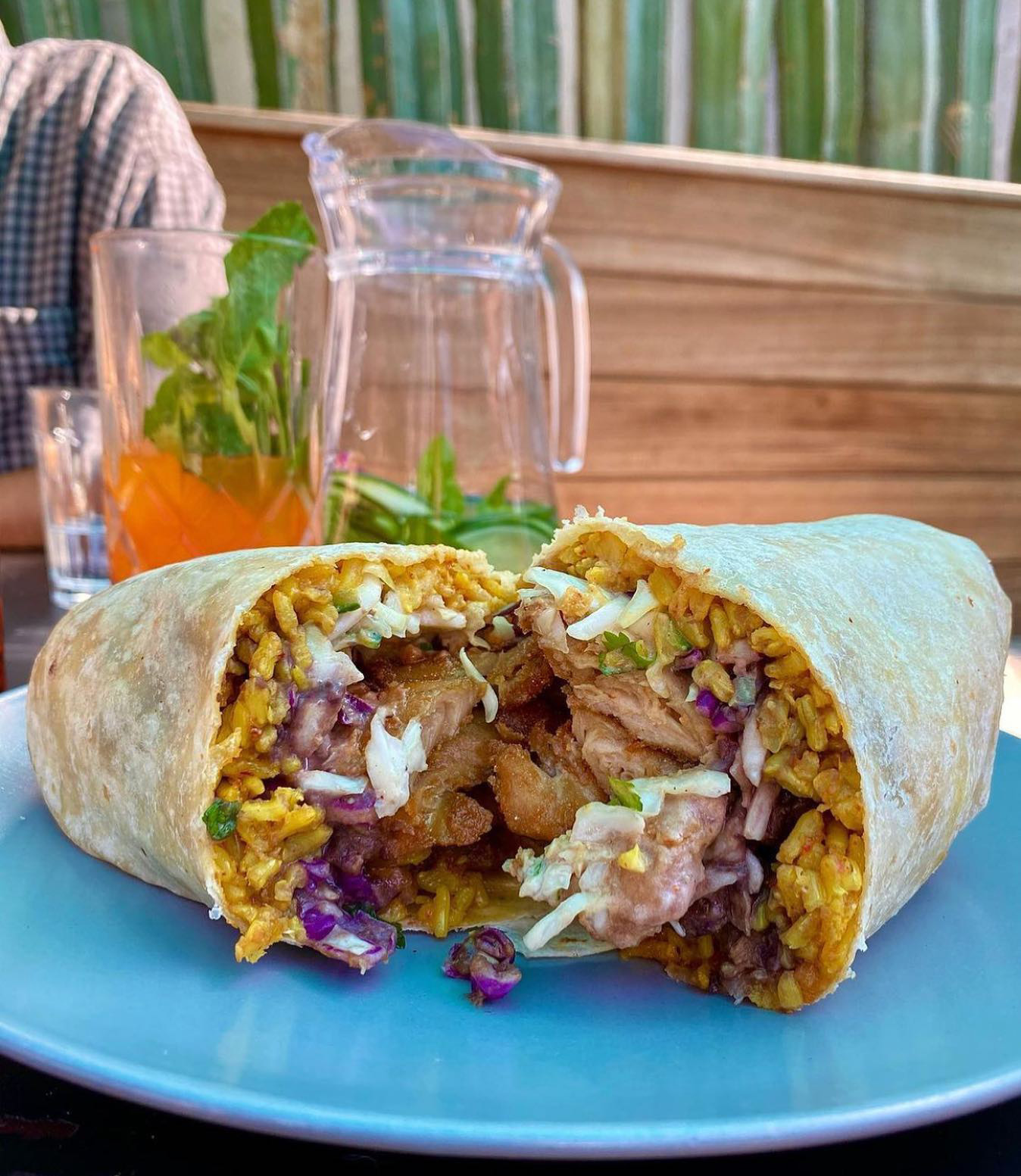