Beyond Meat’s new vegan chicken nuggets are so meaty that they even satisfy carnivorous plants, as shown by a new commercial released by fast-food chain A&W. Earlier this week, the vegan Beyond Nuggets became available at 1,000 A&W locations across Canada for a limited time. To promote the meatiness of the new vegan chicken nuggets, A&W conducted what it called the “Beyond Bait Experiment.”

The chain placed Venus flytraps on a closed set and fed them Beyond Meat Nuggets to see if the carnivorous plants would bite. A&W released the footage, made without any special effects, in an effort to convince skeptical humans that Beyond Meat Nuggets are just as satisfying as their animal-derived counterparts. “This cannibalistic-like approach aims to convince meat-lovers that the new vegan nuggets taste just like the real thing,” A&W Canada said. “There’s no better sample group than a blind plant that only closes its mouth on meaty prey.”

The Beyond Meat Nuggets can be ordered at all A&W Canada locations as a six- or 10-piece meal, as well as an option for the A&W Kids’ Pack.The chain offers a choice of dipping sauces and its BBQ and Sweet and Sour are vegan-friendly.

The launch of Beyond Meat’s vegan chicken nuggets at A&W is the company’s third foray into the plant-based chicken space this summer. As animal-derived chicken shortages continue, Beyond Meat is pushing forward to give consumers a cruelty-free alternative.

In early July, Beyond Meat announced the launch of its Beyond Chicken Tenders at 400 restaurants nationwide. While Beyond Meat previously offered vegan chicken in 2012, the company pulled the product from shelves and spent a decade developing plant-based chicken tenders that would satisfy the discerning palates of modern consumers. The new tenders are made from a blend of faba beans and peas and were created as a suitable substitute for chicken at any meal occasion. Restaurants nationwide, including traditional chicken shops and wing chains, are serving Beyond Chicken Tenders as part of sandwiches, on top of pizzas, and on their own as appetizers with dipping sauces.

In late July, Beyond Meat announced its second vegan chicken venture, this time on the menu at Panda Express. The brand collaborated with the popular chain to create a vegan version of its famed orange chicken—an item that makes up one third of Panda Express’ business. The new Beyond The Original Orange Chicken (BTOOC) was developed to mimic the original orange chicken, down to the sauce, but is made entirely free from animal products. Panda Express launched BTOOC on July 26 at a handful of locations in the Los Angeles and New York City regions. On the first day, the chain sold 1,300 pounds of vegan orange chicken and sold out of the BTOOC in its Southern California branches within two weeks. The BTOOC is on the menu for a limited time to inform a potential national rollout of the vegan option at Panda Express.

Prior to its chicken launches this summer, Beyond Meat was best known for its vegan Beyond Burger—which is made to mimic meat using pea protein and beet juice. The brand also approximates pork with its Beyond Sausages and Beyond Breakfast Sausage. Earlier this week, Beyond Meat unveiled its first crack at pepperoni in a test run at 70 Pizza Hut locations in five cities. The Beyond Pepperoni, developed in collaboration with Pizza Hut, is made from rice and peas and features a hint of spice. 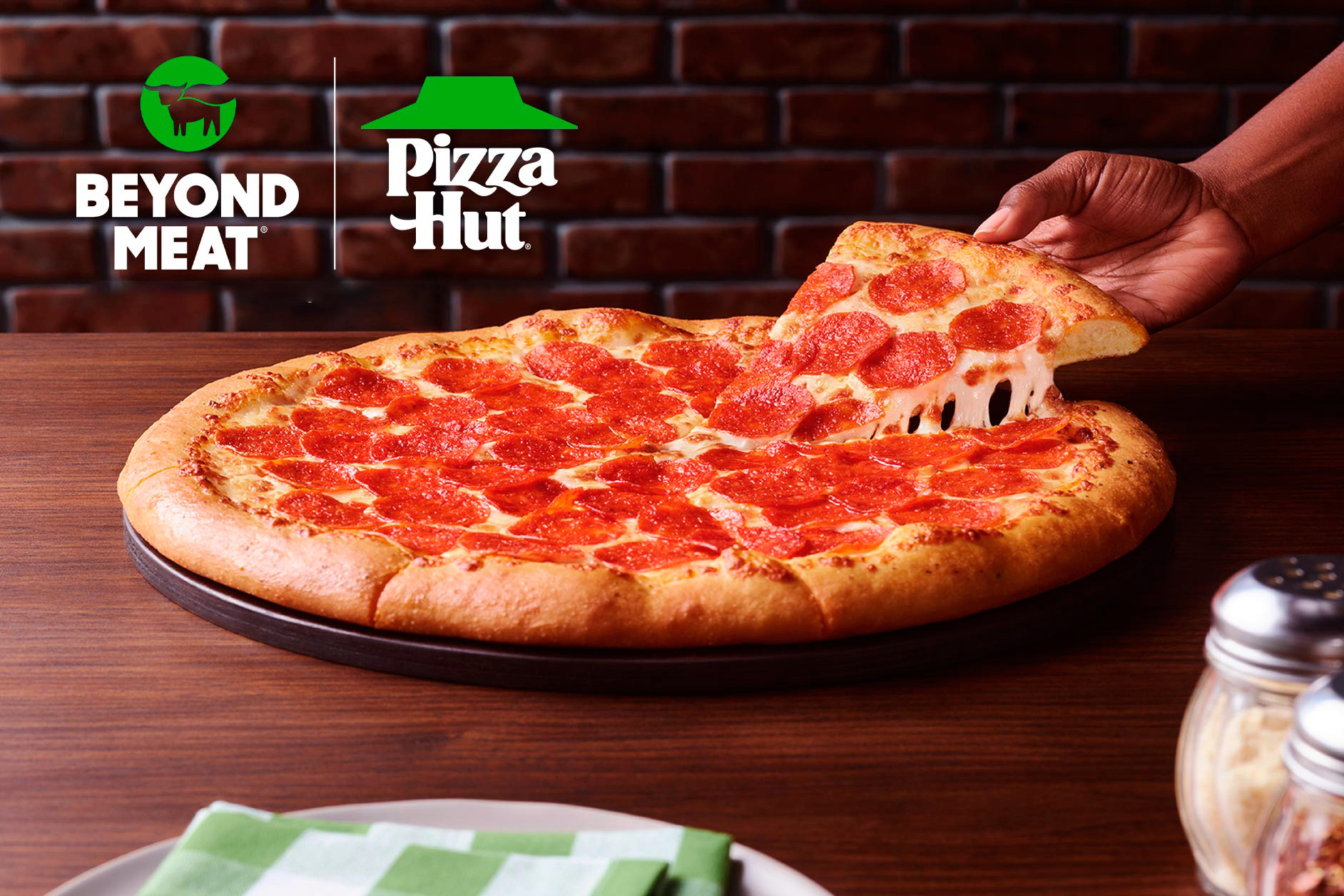 In developing all of these vegan meat alternatives, Beyond Meat aims to replace the outdated technology of using animals as vehicles for turning plants into meat, opting instead to cut out the middleman and make meat directly from plants. “The aroma and taste of meat is driven by over 4,000 molecules, but they’re identifiable,” Beyond Meat CEO Ethan Brown said in a recent interview with Time Magazine. “And we have all this crazy equipment that allows us to separate out the molecules, characterize them, and try to match them with molecules and plants.” And Beyond Meat does this using substantially fewer resources than traditional animal agriculture, all while creating products even carnivores like Venus flytraps approve of.