An entrepreneurial duo expanded their reach for their ghost kitchen late last year by introducing a vegan vending machine that offers vegan food 24/7. 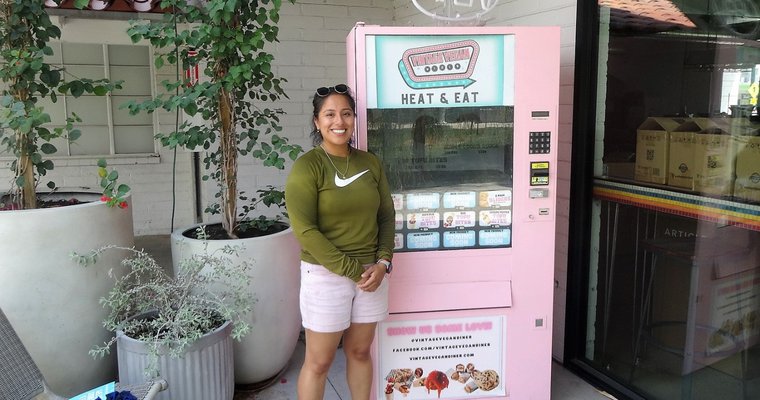 Partners Autumn Parham and Taylor Riley-Parham are on a mission to offer high quality vegan food at affordable prices in Las Vegas, and so far, they’re gaining a healthy following.

Since launching their ghost kitchen, Vintage Vegan Diner, just over a year ago using social media to get the word out, the entrepreneurial duo expanded their reach late last year by introducing a vegan vending machine, offering vegan food 24/7.

The vending machine, which offers frozen tofu bites, sliders and cookie dough for $3 to $5, fits right in with the hip shops at Fergusons Downtown, a downtown enclave for startup restaurants and other businesses. With its “retro” design, the vending machine is one of many attractions to be found at the revitalized Fergusons Motel, along with local music and arts activities.

“We didn’t even have a website,” Parham told Vending Times in a phone interview, recalling Vintage Vegan Diner’s launch.

Shortly after tweeting their menu, they got thousands of retweets.

“The next thing you know the phone was ringing off the hook and we’re getting all these orders,” she said. “Our following, our interaction has all been organic growth.”

Riley-Parham, an Oakland, California native, brought a catering background while Parham, a Las Vegas native, brought experience working at a fast food drive-thru restaurant, Hot Dog ON A Stick, and a formal education in marketing and business management.

A trained chef, Riley-Parham came up with the recipes for the tofu bits, sliders and cookie dough. All the bread used in the sandwiches as well as the vegan cheeses and smoked turkey are made from scratch.

They cook the meals in a rented commissary kitchen.

They came across a Fastcorp machine on eBay that a local vending operator, Sky Top Vending, was selling. The duo taught themselves how to operate the machine from the manual. Parham designed the graphics.

The duo launched the vending machine in October, but had to discontinue soon after on account of the coronavirus pandemic.

They continued to offer their vegan products online, during the lockdown period, delivering to both local customers and some out of state. They also developed a wholesale following among local coffee shops and retail stores. The long-term goal is to open a vegan drive-thru restaurant.

When restrictions eased, the April relaunch of the vending machine created a lot of notice in the Las Vegas media.

“The vending machine was a great idea because it brought more eyes on us,” Parham said. “When we first posted about it, we received over 400,000 impressions. From there we got a lot of coverage from different vegan publications. We’ve been really lucky.”

They tested it on a weekend in April, and have kept it there since. The machine did about $500 in sales on its opening weekend.

“It brought them (Fergusons Downtown) a lot of foot traffic as well,” Parham said. “It’s been a good partnership so far.”

“You have those people who go to Fergusons for different events,” she said. “They have events during the week. People come up and take pictures with it.”

“They’re pretty surprised to find that it’s vegan food and that it’s frozen,” she said. “I myself didn’t know that those (frozen vending machines) existed.”

The machine does not have a credit card reader, so all purchases are made in cash.

Customers can call a phone number posted on the machine if they have questions, Parham said, but there have not been any mechanical issues with the machine.

There are four different types of items at all times in the machine, such as sliders, tofu bites in four flavors (original, Buffalo, lemon and barbecue), cookie dough and gluten-free cookie dough which was highly requested.

The only item over $5 is the sample box which contains all the different items for $25. The sliders and tofu bits are $5 while the cookie dough is $3. Sliders are the top sellers.

Cooking instructions are posted on the machine, along with discount coupons for online orders and a bin holding carry-out bags.

The machine sells more than 50 items in one to two days, but it is not the company’s main source of income.

“It’s a good little marketing tool that we have,” Parham said for the machine.

Several local businesses and apartment complexes have asked to have the machine at their own sites for special events. Some have asked to rent the machine. The pair have not yet honored these requests, but are considering it.

Long term, they want to have at least 10 machines in Las Vegas and expand to Los Angeles, where the vegan market is more developed.

“I feel it’s a real turning point right now when it comes to vegan food,” Parham said. “I think that we have a good opportunity to step into that space. There’s a need for it.”

They hope their goal of having a drive-thru could be achieved within the next year, she said.

As for the vending machine, “I feel like it serves its purpose,” Parham said.