Dave Pesso, co-founder of NYC’s The Hummus & Pita Co., spent the bulk of the pandemic creating a vegan-friendly menu and developing a supply chain to allow national distribution. He discusses how that decision has come full circle as it’s led to an increase of in-store traffic. 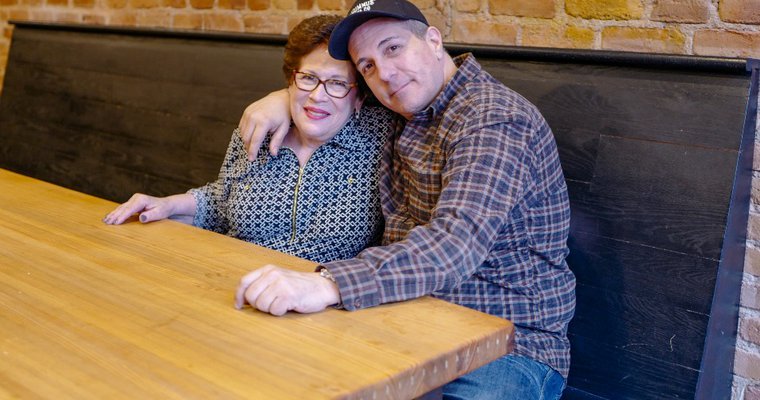 Janice Axelrod and her son, Dave Pesso, co-founded The Hummus & Pita Co. in 2012.

Veganism used to be very ideological. The sentiment was either you’re vegan, or you’re not. But the societal attitude has shifted and there are more reasons than ever as to why people choose to be vegan or adhere to certain aspects of a vegan lifestyle. For some it’s ethics, for others it’s about health, and then there’s the environmental part of it, too. But for us, offering vegan food has been about inclusivity, which is why I spent the bulk of the pandemic testing new recipes, so The Hummus & Pita Co. can continue to lead the way, consistently pushing the boundaries of vegan innovation in the fast casual sector.

The Hummus & Pita Co., the Mediterranean fast casual restaurant that I started with my mom, Janice Axelrod, in 2012, is a place for people of any dietary need/preference, ethnicity, socio-economic category. You name it, and they’ve walked through our doors. While much of Mediterranean and Middle Eastern cuisine is already plant-based, curating our menu to be even more vegan-friendly was a way to bring more people into our stores to eat great, healthy food, without asking them to compromise on flavor or cost. That meant thinking outside of the box of our original offerings and focusing on creating standout plant-based dishes that were delicious in their own right rather than vegan alternatives.

For example, our Vegan Shawarma, Morrocan Meatballs and Gyro are meatless versions of items we already have on the menu, and our customers love how similar they are to their non-vegan counterparts. In fact, the Vegan Shawarma sells just as well as the Chicken Shawarma, but we’ve never done things like everyone else, so we knew we’d have to get inventive to shake up the vegan status quo.

Nowadays, hummus and pita are like bread and butter. You can find it on any street corner made a million different ways. However, there are many traditionalists, who believe that hummus should be done one way without any additional flavors or spices. I guess you can consider our food philosophy unorthodox.

So, the idea of creating a dessert hummus dip was right on par with what we do. The Chickpea Schmear was one of the first ventures we made on our off-the-beaten-path journey to vegan menu innovation. It’s a creamy hummus spread in flavors of chocolate, cookie dough and cake batter that tastes great as a dip for our Cinnamon Sugar Pita Chips. And then, there’s the Chickpea Chiller — the world’s original hummus milkshake. It’s 100% vegan and gluten-free and isn’t a dairy-free alternative to the “real deal.” Actually, our customers say it’s better than a lot of traditional milkshakes out there. We sell hundreds of these every day; people can’t get enough of them. And because it’s the only milkshake we offer, we’re showing non-vegans that there are simple and approachable ways to incorporate a plant-based diet into their lives, without having to give up the flavors that they love. Then there’s our Israeli Couscous and Baklava that are always made vegan using a margarine-type product and simple syrup in replacement of butter and honey, respectively. Our vegan items are being served up from right next to our non-vegan dishes, so, when we say we’re a place for people of all dietary backgrounds, we really mean it.

Family and friends that come in with all different types of dietary preferences can eat together at the same table and no one has to worry that their needs won’t be met. That’s really what we’re all about. Our customers are family and our restaurant is the dinner table. So, while we’re going to think out-of-the-box regardless, developing a vegan-friendly menu is deeply personal to me. We’ve had an open dialogue with the vegan community around us, listened to what they feel is missing from the fast-casual space as it pertains to vegan offerings and fully transformed our menu to be inclusive of everyone. That means making sure that we’re always serving freshly made food made with the highest-quality ingredients every single time. Our hummus is scratch-made the authentic way, our seasonings are directly imported from the Mediterranean and Middle East and nothing we serve is packaged or comes in a pail — we make it all. Because for us, the quality of our food tops the bottom line 100% of the time, which is why our guests come back time and time again for meals they say remind them of their grandmother’s cooking.

Securing a partnership with Goldbelly, an online marketplace for regional and artisanal foods, was a game-changer, and we’ve been fortunate to be able to ship our products, both vegan and not, nationwide. We see it as another amazing opportunity to bring our flavorful food to the masses. And our vegan Goldbelly offerings bring us the most sales making up about 85% of the breakdown.

Offering our food on a national platform has only increased in-store traffic and sales by way of national awareness. Folks will receive our meal kits as gifts and post about how much they enjoy our food online which sparks a conversation about how we make vegan food accessible to many people. We’re incredibly proud to be contributing to a food culture that celebrates an array of eating choices and gives people the opportunity to try vegan foods they may not have considered trying before.

Step by step, we all must contribute to better and healthier eating habits. Especially in light of collectively enduring the nightmare of the past 15 months, you don’t hear people far often enough discussing how important diet is to health and immunity by eliminating comorbidities that also contributed to the mortality rate of COVID-19. We’re just trying to do our part to encourage healthier lifestyles and feeling good by way of diet by ensuring that it’s a choice that’s just as easy as what someone is already eating. Seeing guests’ faces when they taste our food and providing an experience that works for their lifestyle is why we do this. That’s what’s important. I can’t properly explain it except to say that it’s a great feeling.